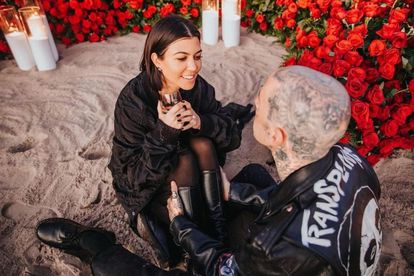 Reality star Kourtney Kardashian marked one week of being engaged to Blink-182 Travis Barker with a topless photoshoot on Sunday 24 October.

Travis Barker got down on one knee and asked Kourtney Kardashian to marry him on Sunday 17 October at Rosewood Miramar hotel in Montecito, California. Kourtney “literally” said yes to marry Travis, who set up a romantic proposal.

The Blink-182 drummer went all out with thousands of roses set up to form a huge heart, surrounded by candles on the beach. Kourtney took to Instagram to share more pictures from the proposal a few days after.

“I woke up all night thinking it was a dream,” she wrote.

Taking to Instagram, the Poosh founder marked one week since she got engaged with two topless photos.

“I can’t believe this was a week ago @travisbarker ????,” she wrote on Instagram.

The scorpion covers an older tattoo the drummer had, which was dedicated to his ex-wife Shanna Moakler. The tattoo was of a heart with Shanna’s name. Travis took to Instagram to share a snap of his new tattoos. Swipe left for a closer look.

Travis and Shanna were married from 2004 to 2008. They have two children together Alabama Luella Barker (15) and Landon Asher Barker (18).

Many Twitter users weighed in on Kourtney’s previous relationship with her on and off ex Scott Disick. Kourtney shares three children with Scott – Mason (11), Penelope (9) and Reign (6). The Keeping Up With The Kardashian’s star did not want to marry Scott but changed her mind about marriage when she met Travis.

In the final season of Keeping Up With The Kardashian’s Scott Disick tried exceptionally hard to win back the mother of his children. However, Kourtney was not entertaining it. Scott is reportedly not taking the pair’s engagement well.

“Scott is going crazy. He’s going to go off the deep end. It’s really bad. It’s about to get dark,” said an insider to Page Six.