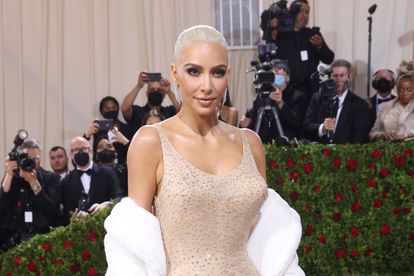 Kim Kardashian attends “In America: An Anthology of Fashion,” the 2022 Costume Institute Benefit at The Metropolitan Museum of Art in a dress worn by Marilyn Monrie in 1962. Photo by Taylor Hill/Getty Images

Kim Kardashian attends “In America: An Anthology of Fashion,” the 2022 Costume Institute Benefit at The Metropolitan Museum of Art in a dress worn by Marilyn Monrie in 1962. Photo by Taylor Hill/Getty Images

Marilyn Monroe is one of the most celebrated female celebrities who epitomised sex appeal and confidence – and whom women around the world to aspired to be like. But Kim Kardashian took it one step further after rocking a dress worn by the screen siren at the Met Gala on Monday night.

The reality star did her best to channel the blonde bombshell, known for her poster girl good looks and seductive movies like Gentlemen Prefer Blondes and Some Like It Hot.

The actress infamously wore the dress during her iconic 1962 performance of “Happy Birthday” at then US president John F Kennedy’s 45th birthday party in Madison Square Garden, New York.

Kim coupled the dazzling dress with a bleached blonde hairdo and diamond accessories. According to the reality TV star, she lost 16 pounds (7kgs) in her attempt to fit into the dress.

When Marilyn Monroe wore the dress, she had to be sewn in as the garment could not contain her famous hourglass curves. The flesh-colored dress – gave the illusion of the star appearing nude, but “dripping in diamonds”.

Made by designer Jean Louis, the sparkly sheer dress set a record for the most expensive garment sold at an auction in 1999 for $1.2 million (R20 million).

According to Time Magazine, Kim formally requested to wear the dress from the Ripley’s Believe It or Not Museum in Orlando, which bought the gown for a whopping $4.6 million (R74 million)

She told Vogue magazine: “The idea really came to me after the gala in September last year. I thought to myself, what would I have done for the American theme if it had not been the Balenciaga look? What’s the most American thing you can think of? And that’s Marilyn Monroe”.

According to Time Magazine, the dress was handled by guards and gloves.

To minimise harm, Kim only wore the real dress for the customary walk up the stairs of the museum. The star then changed into a replica of the gown once she reached the event.

As the dress could not be altered as it was an original, Kim Kardashian had to lose weight to perfectly fit into it.

Whilst many fans praised Kim Kardashian for pulling off the iconic look, other tweeps called the fashion move and comparison “disrespectful”.

@PUTORlCAN: The spirit of Marilyn Monroe woke from her eternal rest to suck the beauty out of Kim Kardashian for disrespecting her legacy”

@MJFINESSELOVER: “Calling Kim K the modern-day Marilyn Monroe is offensive and makes no sense. Marilyn actually came from nothing and became a movie legend and icon in Hollywood. Kim K comes from a wealthy family. There is no comparison”

@pelicinema: “Kim could never pull it off the way Marilyn Monroe did. And she shouldn’t have even tried in the first place”

@JalinsVision: “This is disrespectful asf to Marilyn. She had a hard abusive childhood, her mother was in an asylum, and constantly in foster homes. She was broke and came from NOTHING. Marilyn was an actor, model, singer, dancer, producer etc. Kim was rich and nothing of the sort how dare you”