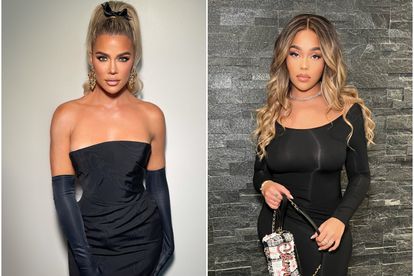 Despite her public humiliation, Khloe Kardashian is arguably the laughing stock of Twitter right now. And frankly many tweeps think she deserves it…

This after on/off boyfriend Tristan Thompson admitted to fathering a baby with another woman during their relationship. The NBA player – known for his serial cheating – also issued a public apology to Khloe, whom he shares three-year-old daughter True Thompson with.

But many tweeps felt the embarrassing encounter was “karma” for Khloe. Especially after she publicly humiliated family friend Jordyn Woods in 2019.

Back in 2019, Jordyn Woods admitted to kissing Tristan Thompson after a drunken night out. All hell broke loose thereafter when Kardashian family – including her best friend Kylie Jenner – distanced themselves and even dragged the model for her actions.

But Khloe forgave Tristan and even gave their relationship another go. Fast forward to 20221/22 and history has repeated itself.

And Black Twitter has not one ounce of empathy for Khloe Kardashian. They’ve even demanded she apologise to Jordyn Woods

“This is the woman that ostracized a 20 year old Jordyn because her baby daddy kissed her while she was drunk. Khloe, I have no compassion sorry”

“I be wanting to feel sorry for Khloe, but then I remember she said Jordyn is the reason her family fell apart and called her a ‘fat f***ing asshole’ “

“I’m sorry but Khloe deserves all the embarrassment she’s receiving. Life comes back around FULL CIRCLE. She tried to shame & embarrass Jordyn all while taking that man back over and over. She was never gonna win with how ugly her heart is”

“Until Khloe Kardashian apologies to Jordyn Woods, the karma will not end”

“Khloe Kardashian really owe Jordyn Woods an apology. Because she had all that work and energy for her over a nigga that cheat on her every 2-3 business minutes”

NO WORD FROM JORDYN WOODS

The couple have been in a relationship for over a year and seem blissfully in love.