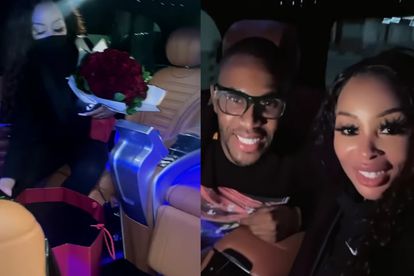 Khanyi Mbau returns to Kudzai in Dubai. Images via screenshots from Instagram @_iam_47.

Khanyi Mbau returns to Kudzai in Dubai. Images via screenshots from Instagram @_iam_47.

Taking to Instagram, Khanyi Mbau posted a picture of her first-class flight back to Dubai on Thursday 30 September. The Red Room star disabled the comments feature on the post which was captioned with a plane emoji.

An excited Kudzai Mushonga posted an Instagram story of himself shopping for the actress at French luxury goods conglomerate, Cartier as he awaited her arrival.

Khanyi Mbau touched down in the Middle East and her boyfriend Kudzai was #BoyfriendGoals. He greeted her with expensive gifts and a bouquet of red roses. He also picked her up in a Maybach V Class.

“I got her in the back of that Maybach V Class, you’ve never seen,” he wrote on Instagram.

The Happiness is a Four-Letter word star’s return to Dubai is exactly a month after her “great Dubai escape”. The pair were on a business “baecation” in Dubai.

On 30 August Khanyi Mbau was dropped off at the salon. In the early hours of the morning on 31 August, she still had not returned which prompted Kudzai Mushonga’s anxious social media spree as he thought she was missing. This stressed out Mzansi as they believed she was actually missing.

However, Khanyi Mbau was safe and in motion – on a flight back to Johannesburg, without telling Kudzai. She asked him to take some time to think. An emotional Kudzai had several meltdowns over Instagram live sessions.

While the actress was on a mission to secure the bag in South Africa. She made appearances and performances as well as partnered with sneaker brand Bathu and teased an Amapiano hit with Sir Trill.

The Amapiano song was inspired by her great Dubai escape.

When translated to English this means leave as if you’re coming back, leave the man in Dubai.

That is exactly what the actress did, she left Kudzai high and dry in Dubai, only to return a month later after making him sweat. However, her young brother Lasizwe Dambuza showed concern over the pair’s relationship over an episode of Drink or Tell the Truth with Boity Thulo on 17 September.