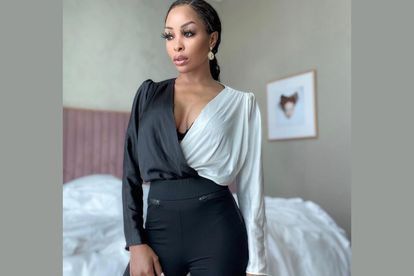 South African actress Khanyi Mbau teased that she may have permanently relocated to Dubai in a video posted to Instagram today (13 October).

‘HOW IS THE LOAD SHEDDING?’

In a recent video posted to Instagram, Khanyi Mbau is poking fun at Mzansi as we experience stage two of load shedding this week. She shared a video of a man saying he is leaving South Africa — never to return. Where is he headed? To Dubai, where the actress made her dramatic return on 30 September.

“You’ll never see my face again!,” says the man in the video.

“Where are you going?,” asks someone in the background.

In the caption of the video, Khanyi hinted that she was not missing the load shedding!

“How is the load shedding?,” Khanyi Mbau captioned the video.

DOES THIS MEAN KHANYI IS NOT RETURNING TO SA?

It is likely that Khanyi may not return to South Africa, since her boyfriend Kudzai Mushonga previously revealed he and Khanyi were moving to Dubai to “go global”. He said that this was because she wanted to leave “dusty” Johannesburg. Among three other confessions, he revealed he set the actress up with a media business in Dubai.

“So I registered a company in Dubai which is Khanyi’s 51% shareholder, she came up with the name. I was like ‘ah, babe come up with a name’, its called Her Connect Media, the plan was for her to do her social media stuff while I just do my regular work. It cost more than a hundred and something thousand just to register a company,” said Kudzai at the time.

The actress revealed that she is currently recording the Dubai song she teased, in Dubai! Khanyi performed the song at an event after leaving her Kudzai high and dry in Dubai. The song basically says to “leave the man in Dubai”.

However, her return to him does not mean she’s letting the song go! In an Instagram story she shared today (13 October) she is seen in a Dubai studio. She also added that it is a remix.

The Red Room star has also been rubbing shoulders with the rich and famous in Dubai at exclusive events.

“Only a few people remain untainted by the world and it’s negative influences @romykukreja REMEMBER HIS NAME ???? thank me later. Will share later,” she captioned the post.