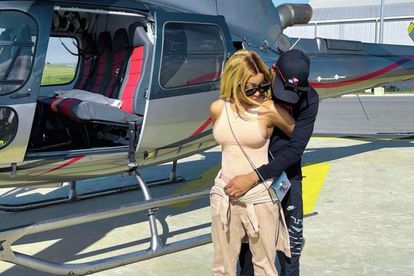 Twitter users were waiting on actress Khanyi Mbau to reveal what lavish gift her boyfriend Kudzai Mushonga got her for Valentine’s Day (14 February) but it was not as big as his epic gift in 2021.

KUDZAI GOES ALL OUT FOR KHANYI IN 2021

Khanyi Mbau received the most special treatment from her boyfriend Kudzai Mushonga on Valentine’s Day 2021. He surprised her with a private performance by a violinist, more than 1 000 roses and Louis Vuitton gifts.

Tweeps were green with envy over how lavish and spoiled Khanyi was on Valentine’s Day. At the time she was just introducing her then new man to the world. The pair were the talk of the town because he was reportedly a Zimbabwean tycoon and allegedly a wanted man/

The pair made headlines towards the end of August during their “baecation” in Dubai. Kudzai went on a social media frenzy thinking Khanyi was missing but she was on a flight back home to South Africa. There was speculation of a toxic relationship but Khanyi seemed to have just needed some time before she flew back to the Middle East.

Kudzai is believed to still be in Dubai while Khanyi’s career has been booming in South Africa. She came back to South Africa around the time Happiness Ever After was released on Netflix.

She has stayed since then and bagged a gig on Showmax’s The Wife and now a reality show on Netflix titled Young, Famous and Africa, which premieres on 25 March. So, many were unsure if the pair were still together but the actress showed off her Valentine’s Day gift.

This must mean the pair are still going strong despite the distance.

Khanyi shared a screenshot of the card Kudzai sent her and the roses and balloons she received.

“I found myself writing this note at 01:05am 14:02:22 since we are miles apart because of work but nothing can take away the beautiful memories we always created for each other. I can’t wait for us to have our 22 Valentine’s together. As we always paint the sky red with love. I love you today, tomorrow and forever. Will you be my Valentine?” read the note.