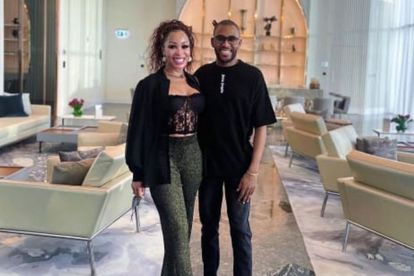 South African actress Khanyi Mbau returned to her Dubai-based Zimbabwean boyfriend on Thursday 30 September and has been living it up in the city.

At the end of August, Khanyi Mbau’s boyfriend Kudzai Mushonga went on an anxious social media spree claiming she was missing in Dubai. This was after she didn’t return from the salon. However, the actress was safe and in motion — on a flight back to Johannesburg.

She hopped on a flight back to Mzansi without telling her businessman boyfriend which prompted several meltdowns from Kudzai over Instagram Live sessions.

Khanyi Mbau seemed to have come back to Mzansi to “refill her bag” as she did appearances and performances, brand deals and more. She even made a song about leaving her man in Dubai.

When translated to English this means leave as if you’re coming back, leave the man in Dubai.

To mark a month since her great Dubai escape, the actress got on a flight back to Dubai where she was greeted with Cartier gifts and roses. Since her return to Kudzai Mushonga, the actress has been living her best life with romantic dinners and nights out in the city.

Khanyi posted several photos to Instagram of Kudzai appreciating her and of course, spoiling her to bits!

Following Khanyi’s return to Dubai, Tweeps joked about how they will now mind their business. This is because many Tweeps took sides at the time. Some Tweeps sided with Khanyi and thought something major had to happen for her to jump on a flight back home.

While other Tweeps thought that the actress was just casually leaving Kudzai Mushinga high and dry in Dubai.