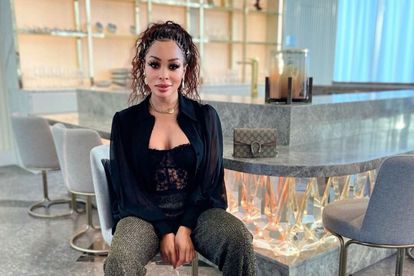 The 13th annual Feather Awards is set to take place on 11 November at The Market Theatre in Johannesburg. Take a look at the full list of nominees here.

DRAMA QUEEN OF THE YEAR NOMINEES

Khanyi Mbau’s nomination is most likely because of her “great Dubai escape”. In August, Khanyi Mbau was on a “baecation” with her Zimbabwean-born tycoon businessman boyfriend Kudzai Terrence Mushonga in Dubai when she decided to catch a flight back home without telling him.

Kudzai Mushonga thought she was missing and went on an anxious social media spree. However, the actress had already safely landed in Johannesburg and went to visit her father’s grave. Kudzai Mushonga was heartbroken and had several meltdowns over Instagram Live sessions.

However, Khanyi Mbau remained silent and instead released a video that went viral on Instagram Live of her singing “Phuma ngathi uyabuya, shiyi’indoda eDubai” (Leave as if you’re coming back, leave your man in Dubai) in the studio with amapiano star Sir Trill.

The Red Room star then made appearances and performances at events. She also partnered with sneaker brand Bathu Sneakers and at the end of September, she caught a flight back to Kudzai in Dubai.

That may just be some award winning drama!

NONKU WILLIAMS AND HER MOM

Nonku Williams and her mom were also nominated in the Drama Queen of the Year category. The Real Housewives of Durban (RHOD) star had tongues wagging when she and her mom, Mimiza “The Queen” Williams, asked Ayanda Ncwane to pay them damages for her child Nothile.

Nonku Williams had Nothile with Ayanda Ncwane’s husband, singer Sfiso Ncwane. This is most likely the reason Nonku Williams and her mom were also nominated for Drama Queen of the Year.

Black Motion’s Thabo Smallz aka Thabo Smol also had tongues wagging when he confirmed that he slept with entertainer Zodwa Wabantu. On an episode of Drink or Tell the Truth, the risque dancer confessed that “she went home with” Thabo after a night out.

Thabo confirmed that this did in fact happen. However, he claims he was not seeing anybody at the time. Therefore, he did what he did. At the end of the video he said “kejile kejile”.