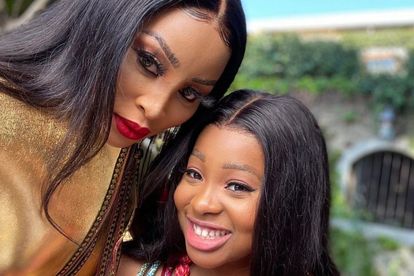 Khanyi Mbau and her daughter Khanukani. Image via Instagram @mbaureloaded.

Khanyi Mbau and her daughter Khanukani. Image via Instagram @mbaureloaded.

South African actress Khanyi Mbau kicked off Young, Famous & African with a bang… she made controversial comments about her parenting in the first episode of the series that premiered today (18 March).

Khanyi Mbau has a 15-year-old daughter with public figure Mandla Mthembu named Khanukani Mbau. She revealed that her parenting style is different from most as she allows her daughter to live on her own, in an apartment next to hers – on the first episode of Young, Famous & African.

“We allow Khanz to be herself, if she wants to try stuff, I mean anything… we let her try it. Cause we want to see who this person is,” she said.

“But then where do you draw the line? What happens when she’s curious about sex at 15?” asks Andile.

Khanyi also said she told her daughter that there is no age to lose her virginity, she could do it “tomorrow”.

“I said there’s no age for it. You can give away your virginity tomorrow night. It’s worse because you sleep in your own apartment,” she went on to say.

The other Young, Famous & African stars Annie Macaulay-Idibia and Andile Ncube were outraged at Khanyi’s controversial comment. The pair were even more shocked that Khanyi allows her daughter to live alone in her own apartment.

“She’s too young. This thing didn’t sit well with me. I didn’t like what I was hearing. She is still young, she might not be able to make the right decisions,” said Annie.

“Regardless of how you speak with her, she’s still 15,” she continued.

Khanyi then questions why Annie and Andile were judging her parenting skills. Take a look at the trailer for the series here…