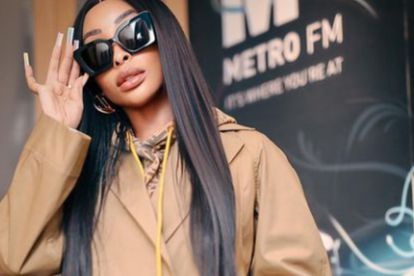 The Wife actress and reality star Khanyi Mbau, who is set to be Africa’s first female roastee at this year’s Comedy Central Roast reveals that she’s ready to be roasted by her peers and fears no one.

The media personality is popularly known for her roles in Muvhango, Happiness Ever After and her stints in reality shows such as Mbau Reloaded and Young, Famous & African.

KHANYI MBAU: ‘I’M READY TO BE ON STAGE’

The actress Khanyi Mbau who’s preparing to be roasted on Comedy Central also reveals in her interview with Channel 24 that she now lives in two countries Dubai and South Africa and adds that she sees Mzansi as a place to work.

The mother of one also says she feels honoured to be roasted and feels like it’s the right time.

“It’s like getting a star on the Walk of Fame in Hollywood. It is getting a star because the roast chooses you, which means you have to be worthy for them to feel that you can carry this content. So, it is an honour. Yes, it’s probably my death day but it’s going to be fun,” she added.

Mbau knows what outfit she’s going to wear, the type of hairstyle, and the perfume she’ll wear as she plans to make the night memorable.

“I got a call from Comedy Central and the executive said, after so much deliberation, we have been waiting for four years to have it as the first black African female to be roasted in the whole world.”

“My first instinct was to run. This is going to kill me. But when I thought about it, I looked at the names that have been on the list. It had to be a yes,” she said.

WHAT MAKES A PERFECT ROASTEE?

The media personality tells the publication that a perfect roastee is someone who’s authentic.

“What makes a good roast is someone authentic and someone comfortable in their skin.”

“And I know the words – authenticity, and skin for Khanyi. Like, what are you saying? But for real? Like we need to be authentic. Real,” explains Mbau.

Mbau adds that roasting is supposed to be fun and that there are no lines between bullying and roasting, but the tone determines where the insult goes and how it becomes bullying or personal.

“Roast someone with a smile without putting a face and without using derogatory words that could break someone. Because at the end of the day, it’s still a person that needs to continue. Call them out, have fun with them, tease them, and that makes the role fun,” she said.