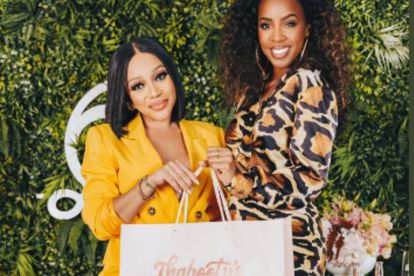 “Gave @KELLYROWLAND some @thabootys,” she tweeted.

The Like This hitmaker retweeted Thando’s tweet with a sweet message to Thando and her lingerie brand.

South African Tweeps were so proud of Thando! Take a look…

“So proud of you Thando! Was a wonderful interview and awesome to listen to in the morning drive. Women should be standing by one another and supporting each other, and not talking crap about each other,” tweeted leloe_m.

THE BEEF WITH ANELE MDODA

While Thando seems to love Kelly, fellow 947 presenter Anele Mdoda may not have the same feelings. Anele and Kelly often trend on Twitter at the same time and this is because Anele once said that Kelly is not as pretty as Beyonce. She went on to post photos of the singer with and without make up to prove her point.

Kelly posted some photos of her showing off her body in a yellow swimsuit. The swimsuit looked almost identical to the one the Breakfast Club host wore on her trip to the Maldives. So, the pair trended on Twitter as Tweeps believed that Kelly knew what Anele said and deliberately tries to throw shade at her.

Tweeps brought up this hate in the comments of Thando and Kelly’s post. Take a look…