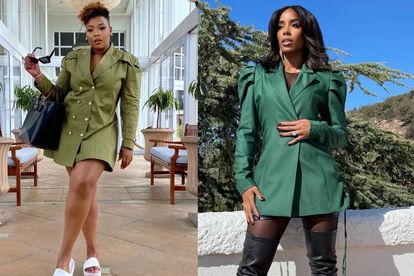 Anele Mdoda and Kelly Rowland trended on Twitter because Kelly is in SA. Images via Instagram @zintathu @kellyrowland.

Anele Mdoda and Kelly Rowland trended on Twitter because Kelly is in SA. Images via Instagram @zintathu @kellyrowland.

American singer Kelly Rowland announced that she touched down in South Africa via tweet on 14 April but where is Anele Mdoda?

KELLY IS IN SA BUT WHERE IS ANELE?

Kelly Rowland and Anele Mdoda, who are considered to have some beef, were both trending on Twitter again today (14 April). The former Destiny’s Child star usually trends on South African Twitter after she posts a photo but this time it was because she has arrived in South Africa. She was asked if she knew she trended in Mzansi when posting and she said no.

Kelly then shared a stunning photo of herself with a South African flag in the caption.

So, where is Anele? Well the radio personality is taking a break from the breakfast show she hosts on 947. She is said to be travelling to different countries to sharpen her broadcasting skills.

“Anele’s Future-Fit Master-Classes will enable her to reimagine 947’s Anele and The Club breakfast show, whereby she will be exploring new and emerging broadcasting and entertainment trends plus interrogating global best practices that will invigorate the show on her return,” the station’s website reads.

Anele will only make her return to 947 in July.

It all began about three years ago, when radio personality Sizwe Dhlomo tweeted that Kelly Rowland was the star of Destiny’s Child. Anele disagreed and said Kelly is not beautiful without make up, which made her trend on Twitter. She went on to share photos of the Destiny’s Child star with make up and without it.

The beef was reignited in September 2021 when Kelly Rowland posted photos in a yellow swimsuit from her vacation in Italy. This was after Anele wore a very similar yellow swimsuit while on vacation in Maldives. So, Tweeps thought this could not be a coincidence.

Everytime Kelly posted a photo afterwards Anele would trend on Twitter. There was also a time Kelly posted snaps in a green suit after Anele was seeing wearing one. Is this intentional? Well Anele doesn’t think so.

“I’d love to take the credit for that, but I promise you guys kelly doesn’t know who I am,” she said to MacG.

ALSO READ: MacG gets candid with Anele: ‘Why do you hate Kelly Rowland?’ [watch]