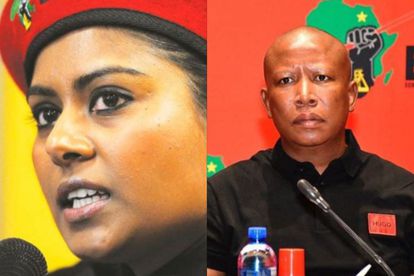 Twitter users weighed in on EFF leader Julius Malema’s remarks on Advocate Malesela Teffo and the link to Kelly Khumalo’s lawyer Magdalene Moosamy being the former EFF treasurer-general via a tweet on Wednesday 27 July.

A Twitter user who goes by the handle @Mo13Tshepo pointed out that Kelly Khumalo’s lawyer Magdalene Moonsamy is the former Economic Freedom Fighters (EFF) treasurer-general. This comes after EFF leader Julius Malema made comments about Advocate Malesela Teffo.

Advocate Teffo was previously representing four of the five hitmen accused accused of murdering former Bafana Bafana captain Senzo Meyiwa. This was before he stepped down as their legal representative. Senzo is believe to have been murdered in a botched robbery at singer Kelly Khumalo’s mom’s house in Volsloorus on 26 October 2014.

Senzo’s is Kelly’s ex-boyfriend and “baby daddy” – they share a seven-year-old daughter named Thingo. The Tweep pointed out that Malema has previously worked with Khumalo’s lawyer but had a lot to say about Advocate Teffo. Take a look..

Other Tweeps have weighed in.

JULIUS ON ADVOCATE TEFFO AND KELLY

So, what did Malema say about Advocate Teffo? The EFF leader said that he is self destructive and has only himself to blame. This comes after Advocate Teffo claimed to have an eye witness who saw Kelly “mistakenly” pull the trigger on Senzo.

“I don’t believe there is any Cyril who concocted anything on him. He was self destructive and he has got himself to blame,” he said as he claimed Advocate Teffo loosely throws in people’s names without backing it up with facts.

So, was Malema siding with Khumalo? Not exactly. He claimed that Kelly knows something and wants her to speak out.