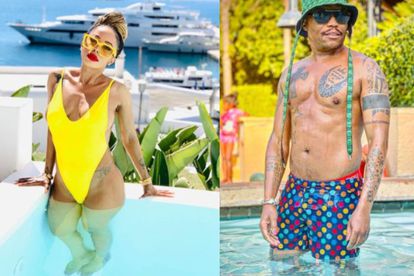 On the latest episode of Life with Kelly Khumalo which released on Showmax on 23 August, the singer punished her son Christian by threatening to take his money – which he received as a birthday gift from media personality Somizi Mhlongo – to fix her garage, which the 12-year-old broke.

The singer called out her son Christian for breaking her home garage in the latest episode of her reality show – Life with Kelly Khumalo which was released on Showmax on 23 August.

“Christian took it upon himself to go and close the garage. And remember he is closing it manually. He’s short. So, he pulled the garage and he broke the garage,” she explained.

She went on to say that she will be using his money, which he received from media personality Somizi Mhlongo, as a birthday gift, to fix the garage.

“You know you’ve broken the garage? I’m going to take your money to fix my garage. So, he had money from his uncle Somizi outside of his other money that is being saved for him,” she continued.

“Next time, when I tell you not to do something. You will not do it. Your money, all of it, is going to fix my garage,” she added.

Kelly has addressed issues with both her “baby daddies” so far this season. The singer shares Christian with television host Jub Jub. She also has eight-year-old Thingo with later soccer star Senzo Meyiwa.

Kelly has slammed Jub Jub for his Mother’s Day tribute to her and claimed he never made an effort to see their son. On the other hand, Kelly has also slammed Senzo’s family for milking him as a “cash cow” and not loving him.