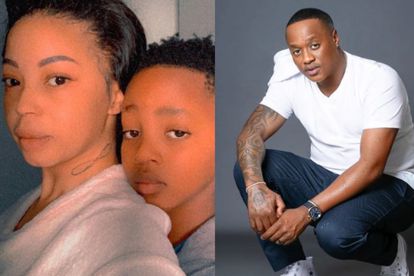 Kelly Khumalo threw a 12th birthday party for her son Christian, who she shares with TV host Jub Jub – on the latest episode of her reality show. She went out of her way to nail the jungle theme and by him the gifts he wanted but she did not feel like he was grateful.

“No emotion. Nothing whatsoever. He feels like he’s entitled to it,” said Kelly after gifting her son a pair of Jordans.

Kelly’s mom Ntombi explained that Christian is shy. So, jhe comes off as ungrateful but he is just not expressive.

“When Christian receives something he becomes shy. As a person who bought the gift, you’ll feel like he’s ungrateful. He’s not expressive,” said Ntombi.

Kelly then explained that she does everything to give her kids the things she never had.

“I’m not a person who thrives or lives on expectations. However, I bend backwards for my children. I do everything I can to give them the life that I’ve never had. Inspite or outside of the fact that I am a single mom,”  she said.

DID THE SINGER SHADE JUB JUB… AND HIS MOM?

Kelly then said that when Christian opened the pair of Jordans he had no emotion. She then said that this is a trait he shares with his dad. Was she throwing shade at Jub Jub?

“So, Christian said to me ‘ma’ because I tried to get him Jordans on Christmas, I couldn’t find them. They were out of stock. So, I was like birthday is coming I will get them. He opens them, no emotion,” she said.

“And this is a very bad trait that I’ve seen from his father. Who feels like the world owes him something,” she continued.

The Empini hitmaker than sat down with Christian and spoke to him about being thankful.

“I’m happy that you are happy. However, I have concerns. You must always be thankful when you get something because other kids don’t have that privilege you have to get whatever that you can,” she said.

She then seemingly threw shade at Jub Jub’s mother Mama Jackie. She implied that Mama Jackie has a hand in how Jub Jub was raised. Kelly explained that she did not want to be that kind of mother.

“His father had his faults and whatever, but I feel like his mother also had a hand in him becoming who he is today. And I don’t want to be that kind of a mother. Remain grounded at all times. You are growing and as you grow if I let certain things slide we are going to have problems in the future,” she continued.

ALSO READ: ‘I don’t have time for rubbish’: Kelly reacting to Senzo or Jub Jub drama?