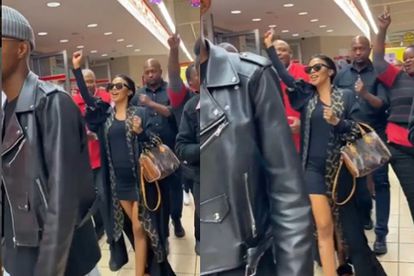 Kelly Khumalo posted a video of herself dancing with Shoprite employees on her Instagram…and people are convinced that they have spotted a baby bump!

The actress and singer-songwriter received a warm welcome at the Shoprite franchise at Dawn Park. This formed part of her From A God To A King Tour publicity campaign in which she visits Shoprite stores, in Gauteng, to meet fans.

The tour will kick off at The Top Arena Carnival City this Saturday 17 September.

Earlier this year,  it was rumoured that Kelly was dating was former Kaizer Chiefs player Mthokosizi Yende.

Tweeps have come out guns blazing with the pregnancy claims. Some have gone as far as saying that Kelly is galavanting while the murder trial of her baby daddy and soccer star Senzo Meyiwa is underway.

ZANDI ALLEGEDLY SLEPT WITH SENZO WHEN KELLY WAS AWAY

New evidence has surfaced in the trial of the slain Bafana Bafana captain and Orlando Pirates goalkeeper Senzo Meyiwa. It is alleged that Kelly’s sister and singer Zandile “Zandie” Khumalo Gumede was actually having an affair with Senzo while he was dating Kelly.

Tumelo Madlala — who has been in the witness box since Tuesday 13 September — testified that it is possible that the late soccer star dated Zandie because “Senzo loved women”.

Tumelo was also asked by defence counsel for the accused, Thabiso Thobane if he knew that Senzo lived with Kelly and Zandile in an estate in Mulbarton. Tumelo said he had no idea because when he visited them, he would sleep in the other bedroom with his girlfriend while Kelly and Senzo slept in the other bedroom.

Kelly has not said anything regarding the pregnancy claims. She is hard at work promoting her tour and seems unbothered by the recent developments of the case.

ALSO READ: Witness to testify Kelly was a beneficiary of Senzo’s life cover