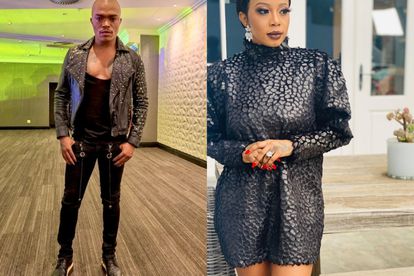 South African singer Kelly Khumalo declined the offer to replace media personality Somizi Mhlongo at the Zimbabwean restaurant reopening gig scheduled for 4 November after he was banned from the country due to his sexuality.

Somizi Mhlongo was booked as a guest chef for the reopening of the Garwe Restaurant in Harare, Zimbabwe. However, the Apostolic Christian Council of Zimbabwe wrote a letter to the President’s Office to ban the former Idols SA judge from the country. This was because of Somizi’s sexual orientation.

Homosexuality is illegal in Zimbabwe which means people who belong to the LGBTQIA+ community have to hide their sexuality. Following the church’s attempt to ban the former Metro FM radio host from Zimbabwe, the Zanu-PF Youth League obliged. The political party announced that he will no longer be visiting Zimbabwe for the event.

“The scheduled reopening of Garwe restaurant in Harare is a welcome development in the food industry sector. I have engaged the owner of the outlet, Ms Mandi, expressing our concerns and those by different societal groups over the invitation of one of the highly controversial guests (a declared ngito),” said Zanu-PF acting deputy secretary for youth affairs Tendai Chirau.

“I am glad to announce that the owner took heed of the great concerns and elected to remove the said ngito (gay person) from the guest list and never to associate themselves with the said character again,” Chirau continued.

Somizi’s friend Kelly Khumalo was thereafter offered the gig at the restaurant. Mandy Mvukwe-Chimhini confirmed to Tshisa Live that Kelly was booked for the event. However, her manager Khothatso Tsotetsi revealed that at the time she had no idea why Somizi had been banned from the country.

Tsotetsi added that when she found out it was due to Somizi’s sexual orientation, she distanced herself from the gig and declined the offer.

ALSO READ: ‘Beyond horrible’: Tweeps on Kelly Khumalo as a judge on ‘Idols SA’

While Garwe Restaurant attempted to replace the media personality with Kelly, he decided to replace them instead. He revealed he was invited to a gig in Namibia when the organisers of the event found out he was no longer going to Zimbabwe.

“Yesterday after my Zimbabwean saga of them not wanting me to come there, I got an invite immediately afterwards and here I am now (at the airport), I am going to Namibia, I’ve got a gig tonight, they just booked me. Did a Covid test and I am going,” he said in the video.

He later shared a video of a crowd in Namibia going wild when he appeared on stage. The media personality was in the country just a month ago.