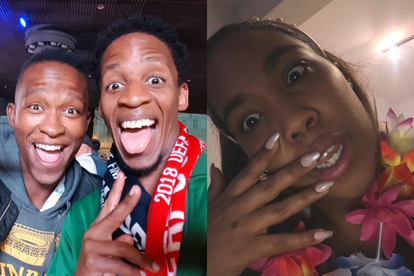 In 2020 TV presenter and media personality Katlego Maboe broke the internet with a clip of himself apologising for cheating on his then wife Monique Muller. Now, almost a year later, the estranged couple’s friends are now at each other’s throats taking sides in a very heated Twitter thread.

Katlego vs Monique: The friends get involved

On 1 November this year, a close friend of Expresso TV presenter Katlego Maboe headed to Twitter where he wholeheartedly defended him in an explosive thread.

The friend, whose name is Volo Ganca, claimed that Monique had always been suspicious of Katlego’s relationship with former fellow show host Zoe Brown. He also went on to say that Monique threatened to keep their child away from him after Katlego attempted to end the relationship.

“Travelled with him. I was in Ukraine on the night where his infidelity occurred. I was there when his relationship started,” he wrote.

He then went on to add:

“His partner was pregnant and threatening to leave with the child, so he could never meet him if he got on the plane to Ukraine.

“The reason for the threats? She was suspicious of the nature of Katlego and @zbzoebrown’s relationship. She always has been,” he wrote.

“Kat had tried to leave his relationship before. He tried to reach out to his friends.

“He tried, and on one occasion, when he did, his partner was listening in on the conversation from the other side of the booth. Everybody who was there saw her.”

He also went on to add that Monique and her family were harassing Katlego and he has evidence of this.

The thread was not well received by Monique’s friend Caldine Wyngaard who quickly took to the comment section where she defended Monique.

According to Caldine, Volo was not there when many of the things Monique claimed had happened, she also went on to say that Volo was a “party friend” implying he was only there for a good time.

“You are right. This is all the Truth from your perspective. YOU hadn’t been in Kat’s home for more than 2 years.

“You hadn’t been around them with their child & you certainly had not been around when the police came to remove him from their house because of domestic violence,” she tweeted.

“What did Kat do for me? Please man tell me? In the years that we were friends, you were there once Volo! For a birthday party good-time friend. Kat might have done wonders for you but not I and I will not be silenced when someone is an abuser. You DONT KNOW WHAT HAPPENED!”

While many South Africans initially seemed shocked by Katlego Maboe’s actions and condemned him for cheating, things seem to have changed dramatically as many of them are now calling for his job to be handed back to him.

A lot of them appear to have had a change of mind and even slammed Monique’s friend as heartless for continuing to make allegations about Katlego.

“It’s how you are defending cruelty for me, I’m sure your friend still has a job somewhere while Kat has lost everything he’s worked hard for. If he allegedly did cheat on her, y didn’t she just leave him? How will all of this benefit her? Their child? Selfish!”