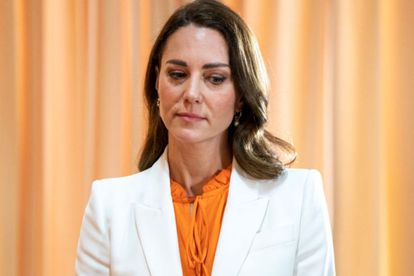 Prince William and wife Kate Middleton’s tour of the Caribbean is not going according to plan. In fact, many might consider it a disaster…

And the Duchess of Cambridge has seemingly taken most of the brunt.

From questionable pics seemingly showing her keeping a distance from a group of black children to a clip of her flinching after a woman touches her, many have hailed the future queen as “racist”.

And to add insult to injury, another viral clip shows Kate seemingly being snubbed by former Miss World Lisa Hanna.

However, the Jamaican beauty queen has claimed that not everything is as it seems.

Prince William and Kate Middleton arrived in Kingston, Jamaica on Tuesday, 22 March. This amid  protest actions by Jamaicans who are demanding that Queen Elizabeth be removed as a head of state. Citizens of the Caribbean country have expressed their desire to become a fully independent state.

The couple were met by Lisa Hanna, a former Miss World and member of the People’s National Party, at a ceremonial welcome at the Norman Manley International Airport.

According to reports, Lisa’s party is behind calls for the country to sever ties with the British monarchy.

The Cambridges arrived in Kingston, shortly after one particular rally ended, in which protesters called upon the monarchy to “apologize” and make slavery reparations.

During this time, a video clip of the alleged “snub” took place. In the clip, Kate Middleton is seen sitting beside Lisa Hanna. The wife of Prince William then turns to greet the MP, who seemingly ignores her and looks the other way.

As expected, the clip went viral on social media with many reacting to the shady snub received by Kate Middleton.

Amid the speculation, Lisa Hanna has spoken out to set the record straight on what really happened.

In an Instagram post, the brunette revealed that she was nothing short of “pleasant” to the royals.

Alongside pics of her smiling and engaging in conversation with Kate Middleton, Lisa wrote:  “Today I welcomed Prince William and the Duchess of Cambridge Kate to Jamaica on behalf of the Leader of the Opposition in celebration of the Queen’s platinum Jubilee.”

“We had a very interactive and pleasant conversation throughout the proceedings as we talked about family, our cultures and our people”.

However Lisa claimed that whilst she was “courteous and respectful”, she was fully behind the country seeking reparations.

She continued: “There’s no doubt at this time that we all seek our true independence and want to develop systems & strategies where we become free from the monarchy. But until then we will always remain a courteous and respectful country.

“I am a firm believer in reparations and as such when I was Minister of Youth and Culture of culture I led the reparations committee which made strides in developing a legal submission to Britain which examined the economic cost of slavery to our country”.