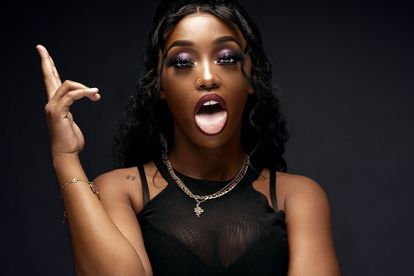 South African dancer Kamo Mphela left fans gushing after her performance at the South African Amapiano Awards. However, after Tweeps found out how much she charges for gigs, they began to drag her on Twitter on 25 October.

The highlight of the South African Amapiano Awards was the electric performance by Kamo Mphela. She performed a few of her hits with a choreographed dance routine to a live audience at the Sandton Convention Centre.

She also won Artist of the Year. Read the full winners list here.

Tweeps recently gushed over Kamo’s electric performance in the UK last month. They loved that she took her dance moves internationally and explained that this was the life they wanted for Gqom Queen Babes Wodumo. However, they thought “a man (her husband Mampintsha) ruined it for her.”

Blogger Musa Khawula tweeted how much Kamo charges for a gig and the amount shocked Tweeps. The dancer is said to be charging R35 000 for a booking.

This amount does not include travel expenses and accommodation. To add to the travel expenses, Kamo also requires flight and transport for four other people other than herself. This is her manager, two dancers and a DJ.

“Booking Kamo Mphela costs R35 000. The fee does not include travel and accommodation. Flights or transport for 5 people: manager, Kamo, 2 dancers and a DJ,” the post was captioned.

TWEEPS: ‘R35K JUST TO DANCE LIKE SHE’S ON FAST-FORWARD?’

Tweeps were not impressed with how much the Nkulunkulu hitmaker charges for gigs. Kamo’s performances are often described as “electric” because of her speedy moves.

A tweep used this against her, writing: “R35k just to dance like she’s on fast forward x4.”

However, other Tweeps thought she was worthy of the R35 000 and some even went as far as saying she was worth around R50 000 per gig.

“If we (are) being honest,it should be at least 50k, she really puts on a show,” wrote one tweep.