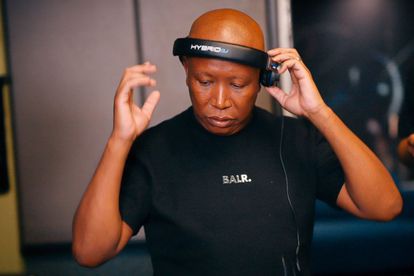 Following Julius Malema’s lavish trip to Spain’s party island of Ibiza earlier this month, the Economic Freedom Fighters (EFF) leader has squeezed back into his red overall and Che beret rhetoric of our country’s poor. Forget the TRESemmé debacle…this time Malema is finding his groove with amapiano music.

For a recent episode of Podcast and Chill with MacG, Malema got all dressed up in a designer black leather jacket and — most likely — a pair of Versace jeans with the price tag hanging out… Difficult to spot the Breitling watch under the jacket, but chances are that it was ticking along nicely.

Okay okay, at least he does not wear TWO Breitling watches — one on each arm — like our very own “Sushi King” and businessman Kenny Kunene, who also shares Malema’s taste for luxury German cars.

The EFF leader is after all, championing for the rights of workers and the poor when he steps onto the political stage and doesn’t spin the decks at Konka Soweto nightclub or hang out with amapiano DJ/producer duo Major League DJz in Ibiza.

Recently Malema also played a set on Metro FM radio host Tbo Touch’s afternoon drive show, The Touchdown, prompting some The South African Facebook page followers to express the wish that he leaves politics and pursue a career as DJ rather.

But Juju does not mix his private party life with his politics.

In the interview, he was quick to tune the government that amapiano beats its efforts to alleviate poverty and create much-needed jobs.

According to Malema, amapiano is providing people with a platform to showcase their talents and generate  incomes.

“Amapiano has fought poverty big time and has changed the lives of people in a big way, and then you ask yourself: ‘What is the state’s role? What role did the state play?’ Nothing.

“Instead of opening studios in every municipality where people could book for an hour to go and record without paying anything to harness and support [talent].”