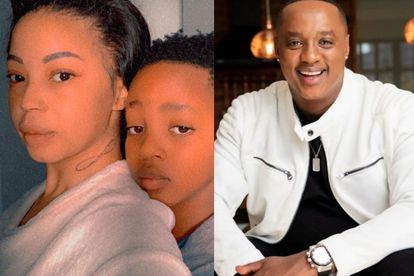 Jub Jub pens a sweet birthday tribute to his son Christian, which he shares with Kelly Khumalo. Images via Instagram @kellykhumaloza @official_jubjub.

Jub Jub pens a sweet birthday tribute to his son Christian, which he shares with Kelly Khumalo. Images via Instagram @kellykhumaloza @official_jubjub.

Television host Molemo Katleho Maarohanye, popularly known as Jub Jub, penned a sweet birthday message to his son Christian, which he shares with singer Kelly Khumalo, on Thursday 12 May after being labelled an “absent father” previously.

Kelly Khumalo and Jub Jub were in a relationship from 2008 to 2012, but it was labelled as a “toxic” relationship. This is because of claima that she was beaten by the television host and he introduced her to drugs. Jub Jub was arrested in 2010, the same year Kelly gave birth to their son Christian.

The singer previously expressed that Jub Jub was an absent father on an episode of her reality series – Life with Kelly Khumalo. She also mentioned that she made efforts for her son to have Jub Jub as a father in his life but it did not work out.

“I’ve tried and when Christian gets older he will know. I mean his old enough to remember that I did mention certain things with him because I was trying to make an effort for him to have a father in his life, I am washing my hands. I have had enough,” she said.

Jub Jub leaked an audio clip of him trying to be in his son’s life on an episode of Podcast and Chill. He claimed to have made efforts to see their son but says he was ignored. The Uyajola 9/9 host also claimed Kelly seduced him with muti.

City Press reported that the television host was ordered to apologise to Kelly to get his job back on Moja Love. So, he released a public apology to the mother of his child.

JUB JUB PENS A SWEET BIRTHDAY MESSAGE TO HIS SON

However, Jub Jub surprised his fans and followers when he posted a Mother’s Day message to Kelly on Sunday 8 May.

“Despite our differences, I would like to wish the woman who carried and brought my son into this world a Happy Mother’s Day,” he wrote.

Christian celebrated his crown birthday turning 12 on 12 May and his mom posted a sweet tribute to him.

Surprisingly, so did his dad.

“Happy birthday champ, I love you too much. I hope you believe in yourself as much as I believe in you, if ever you feel like life is trying to knock you down, it won’t succeed for as long as I’m alive. Re ba tloung Le ba taung. ❤️,” he wrote.

ALSO READ: Jub Jub praises baby mama amid call for him to get ‘full custody’ of son