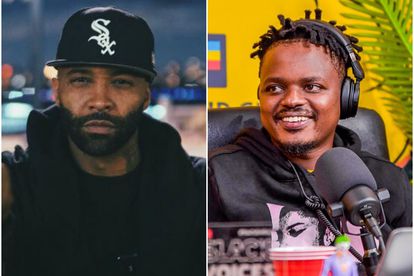 MacG is showing US rapper Joe Budden flames after his recent comments about him.

The South African podcaster took to his Podcast and Chill show to react to his American counterpart’s shady comments on air.

During his podcast last week, Joe Budden discussed Ari Lennox’s Twitter meltdown and what contributed towards it. But it was his sketchy description of MacG that had the outspoken local star, and scores of tweeps livid.

Joe Budden became a trending topic on Twitter after South African tweeps accused him of being shady to MacG.

With over 500 000 subscribers and listeners from over 50 countries, MacG is the number one urban podcaster in the world. The SA star beats the likes of Budden, Rory and Mal and even The Breakfast Club, which stars Charlamagne Tha God.

But tweeps accused Budden of being petty after he diminished MacG to a “shock jock from wherever he’s from” during his show last week.

This, after claiming he did research on MacG, whom he seemingly hesitated to name.

Annoyed tweeps took to the platform to share their thoughts on Joe Budden’s comments.

“The way Joe Budden avoided to say the ‘MacG or Podcast and Chill’. He was like ‘The gentleman, South African YouTuber, the South African podcaster’. He knows MacG is pulling crazy numbers, by mentioning his name he’d be promoting him even more”

“He is using MacG’s name for relevance and numbers for his lame podcast. No one disrespects MacG or any of our own and gets away with it”

In Monday’s episode of Podcast and Chill, MacG and the rest of his team discussed Budden and how they believed he was being shady.

Sol Phenduka said: “If you’re going to talk about people, research them. You owe it to your listeners”.

MacG added: “The only thing shocking are his numbers. F** Joe Budden. What a loser!”