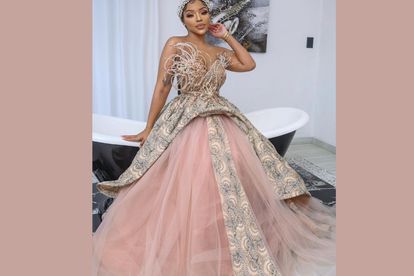 Sources claim that popular influencer and reality star Faith Nketsi, who tied the knot to her long-term boyfriend Nzuzo Njilo about a week ago, is pregnant.

Faith Nketsi had a private groom welcoming ceremony – mahlabisa in Gauteng. The influencer has since changed her surname on social media to Nketsi-Njilo. Fans began to speculate that Faith is pregnant after seeing pictures of her traditional wedding flood social media. Take a look…

Two of the reality star’s friends have told City Press that Faith is pregnant. One of the sources claims that Faith will reveal her baby bump as time goes on.

Another source told the publication that the traditional ceremony followed the lobola negotiations and there will be a white wedding to follow.

“They will have a white wedding later. Mahlabisa in Setswana culture follows the lobola negotiations. They still have to follow the Zulu traditional paths, as Nzuzo is Zulu. Faith has been declining invites to come out with us this week to congratulate her. She told us that she is pregnant and does not want to be seen in public yet,” said the source to the publication.

“Just like anybody else, they would love to have a baby but then it is not happening now. She is not pregnant. She is off social media, yes, but she is not pregnant. People are just assuming that she would rather get married because she is pregnant, but they have been planning to get married for a very long time,” said Tivani according to the publication.

Tivani went on to say that the pair had planned on getting married for a long time.

“People who are close to her would know that she was supposed to get married last year already,” he continued.