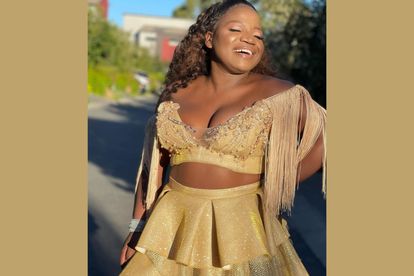 According to their website Kicks Sportswear “the brand Kicks® designs and produces proudly African, feel-good sportswear that offers a unique and competitive alternative to global sportswear brands.”

The Ghanama hitmaker will be developing apparel, sneakers and accessories that reflects her as a person.

“When God’s timing is right everything falls into place, blessings come together and dreams become a reality,” she wrote on Instagram.

“I am happy to announce that I have signed a R120m mega deal called Kokovha with Kicks Sportswear to develop and create amazing products that will reflect everything that I am and believe in,” she continued.

KICKS IS INSPIRED BY KOKOVHA

“I wanted to provide an African alternative by creating Africa’s 1st best sports brand to the World ???? that can compete internationally in every level. My vision is to turn the legacy of Kicks Sportswear into a material force that transforms the destinies of the unemployed and a platform for entrepreneurs,” he wrote on Instagram.

“My Intentions are clear that we need to drive the idea of partnership and collaboration. This way it is possible to change the circle of poverty for good and impact as many people as possible. Over the past weeks we perfected our deal to make sure we both sit on the table,” he continued.

Mhaule went on to call Makhadzi a talented “rare gem”.

“Makhadzi is a rare gem with so much energy and talent. She is enthusiastic about her craft and is willing to put in the work. In all aspects of this deal it is a blessing, and it’s more than just me,” he added.

The duo said they would share more details of the deal with their followers in the upcoming weeks.