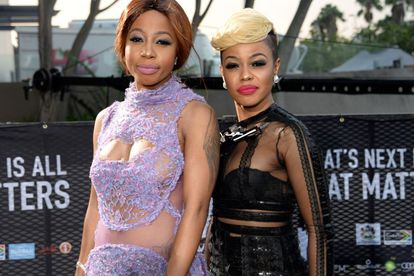 Mzansi thinks Kelly Khumalo’s sister Zandie Gumede might be the witness that Advocate Teffo was referring to after she released a song Ikhwela with lyrics… ‘I think the time has come to blow the whistle … even the men point guns at us’.

The songstress released her song barely three hours after her sister Kelly trended on Twitter after defence advocate Malesela Teffo’s claimed that he has an eyewitness who will testify that the singer shot her then-boyfriend and soccer star Senzo Meyiwa, in the Gauteng High Court, Pretoria, on Wednesday 1 June.

ALSO READ:‘I made a sacrifice with him’: Kelly’s song rubs Tweeps up the wrong way

Social media was abuzz yesterday after songstress Kelly Khumalo’s sister Zandie Gumede released her latest song Ikhwela with cryptic lyrics such as ‘Time to blow the whistle and even men point guns at us.’

While her die-hard fans revealed that Zandie’s song is actually a love song, tweeps revealed that the timing of the song is no coincidence and the lyrics are sending a message.

‘I’ve come a long way. I’m not turning back. I’m hated by a lot of people in your area, even the men point guns at me’.

‘I think the time has come to blow the whistle, what do you think? The day has finally come, let it sound [the whistle]’

“When Teffo dropped that line, my first reaction was I think Zandi is going to speak.”

“Is she the eyewitness.”

“I feel like I ngoma le azoyikhipha and she is using this case for marketing.”

“These are lyrics from a song but there’s definitely a reason why she quoted these lyrics, and I’m sure it has to do with Kelly’s case ngapha I heard these 2 sisters don’t get along, kushubile madoda.”

“Lol the first paragraph is an extract of a song, the 2nd one she’s saying it’s time to whistle, what are you guys saying?”

“When is the witness testifying so I can pause my job?”