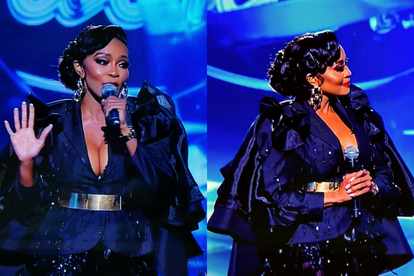 On 10 October this Sunday evening, legendary musician Thembi Seete made a guest appearance on Idols SA and South Africans seemingly loved every minute of it. Many of them headed to social media app Twitter where they showered her with both compliments for her judging skills and her age-defying looks.

It’s been over a month since Somizi was suspended as a judge on Idols SA and fans have seen a rotation of celebrity guest judges who either left them wanting Somizi back or singing praises.

The latest person to guest judge on the popular talent show was musician Thembi Seete and many people agreed she did a great job. Such a good job in fact, that many South Africans said that she should become a permanent replacement for Somizi.

Her judging skills were not the only thing people were gushing over because her killer looks also stole the show. Many could not believe how stunning she looked at the age of 44 and were soon begging her to reveal what her secret for staying so ravishing is.

Here’s what the netizens were tweeting

“Guys, can we please keep Thembi Seete as the third judge forever? Because wooow. Her vibe & aura is lit for centuries #IdolsSA.”

“Thembi Seete’s beauty though. Her beauty gets better with age. A perfect definition of “aging like fine wine” #idolssa.”

“She’s a female version of Somizi, the eloquence, and personality! I Stan a Queen- Thembi Seete.#IdolsSa”

Somizi was suspended from Idols SA after he was accused of abuse by his estranged husband Mohale Motaung. He hasn’t been sitting still however and has taken trips to Cape Town and Namibia while making money doing choreography classes in the gym.

He is also still doing his cooking and his hosting and of course, a whole lot of social media posting for those of his fans who have remained supportive during and after the news of the abuse broke.

ALSO READ: Somgaga a no-show on ‘Ask A Man’? Tweeps are disappointed!