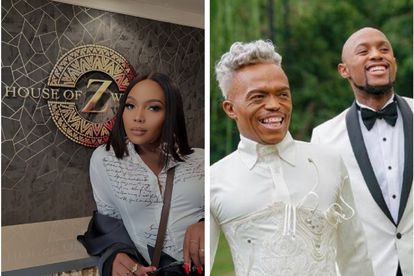 ‘House of Zwide’ actress Tshiamo Modisane ruffled feathers with her views on abuse in the doccie ‘Somizi & Mohale: End Of The Road. Images via @iamtshiamo_m, @famous_lifeandstyle_sa/Instagram

‘House of Zwide’ actress Tshiamo Modisane ruffled feathers with her views on abuse in the doccie ‘Somizi & Mohale: End Of The Road. Images via @iamtshiamo_m, @famous_lifeandstyle_sa/Instagram

Showmax’s doccie about media personality Somizi Mhlongo and his estranged husband Mohale Motaung does not seem to be much of a hit. But one thing that has set tongues wagging about the show is actress Tshiamo Modisane’s comments about abuse.

Viewers are dragging the model and House of Zwide actress for taking Somizi’s side in Somizi and Mohale: End of the Road, which premiered on Thursday 25 August. Tshiamo’s comments about abuse ruffled feathers on Twitter.

‘SOMIZI & MOHALE: END OF THE ROAD’

The documentary looks at the impact of the former couple’s troubled relationship as celebrities, influencers and journalists give their perspectives on what transpired.

According to Lumko, people in the entertainment industry were having discussions about Somizi and Mohale’s relationship and “everyone knew it would end in tears.”

Lumko and MaBlerh both said that when Mohale accused Somizi of physically abusing him, they had already known about it because there had been rumours in the streets.

Mohale’s friend, Peace Maphalu, also said he knew about the alleged abuse and he had to protect his friend by not reacting irrationally. He also added that he advised him to keep all the evidence for when he was ready to talk.

TSHIAMO: ‘IT WAS A SMALL PRICE TO PAY’

However, actress Tshiamo said that she did not know about the alleged abuse and questioned Mohale’s fame, saying that Somizi made him who he is today.

The House of Zwide actress, who plays the role of Nina, also questioned the alleged abuse.

“Where did all of this happen? Because these people were living on social media every day,” Tshiamo asked.

Later in the doccie, the model is heard saying “I think it was a small price to pay”.

The media personality continued to say that Mohale did not go for the “small fish” but went for the “great white shark” in the ocean, which is Somizi. In addition, Tshiamo said that she does not believe that Mohale does not want half of Somizi’s estate in the divorce settlement.

Although it is not clear what Tshiamo was referring to as a “small price” in the doccie, tweeps are not impressed with her overall views and have slammed her for them.

Mohale’s friend, Peace, commented: “Tshiamo, a whole woman saying that the abuse Mohale experienced was a small price to pay is shocking!!!! #SomhaleEOTR.”

Another tweep went as far as referring to Tshiamo’s gender identity, as she is a transgender woman.