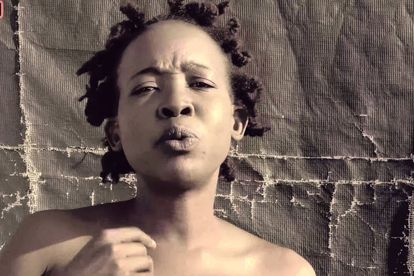 A video of Helen Zille being forcefully dragged out of a voting station by a police officer has elicited mixed reactions from Mzansi tweeps…but no-one is less sympathetic than the outspoken poet and musician Ntsiki Mazwai.

The former Democratic Alliance (DA) head was captured being “frog-marched” out of a primary school in Eastern Cape in a clip that went viral on Twitter after reports that she attempted to canvas votes outside the voting stations.

And like many other South Africans, the outspoken media personality thinks the former politician should face the full might of the law.

NTSIKI MAZWAI: ‘SHE MUST BE CHARGED’

Ntsiki retweeted several posts from tweeps who called out Helen Zille for allegedly breaking the law for reportedly canvassing votes near a polling station.

She tweeted: “One is not allowed to campaign at a voting station…And Helen Zille knows that very well.

“What about opening the case for campaigning at a voting station?”

“She must be charged”.

‘This officer didn’t do anything wrong’

The singer and poet also hit back at claims the police officer “assaulted” Zille amid calls to press charges against him.

Ntsiki continued: “This officer didn’t do anything wrong.”

“Was the police officer supposed to organise a magic carpet to fly Helen Zille out? Is that how people usually get escorted out?”

She then called for the law to exercise equality.

Despite breaking away from the DA in 2019 to form his own political party, Mmusi Maimane has come out to condemn the treatment of former head Helen Zille

He tweeted: “In a democracy built on the principles of human dignity we do not ever condone such behaviour.

“The treatment of @helenzille by the police was atrocious and unacceptable. This is the second time today that the police have abused civilians on camera. Sies”.

But followers of the One South Africa Movement (OSA) leader did not agree with him.

Zuma backed by diamond dealer ‘with R100m frozen by the state’