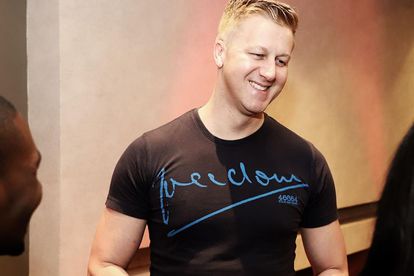 Gareth Cliff has hit back at criticism of his show The Burning Platform after it landed him in hot water with tweeps and it’s sponsor Nando’s.

The media personality defended himself on this morning (28 October) and the no-holds barred show after he was accused of “excusing racism” by various entities, including the One South Africa Movement (OSA) political party.

But the outspoken and controversial media personality claimed that while he should have handled things differently, he also believes his comments, and particularly the interview, was what his “brand is about”.

Speaking in a new episode of The Burning Platform on Thursday morning, the controversial star admitted to “losing his cool” on the show.

In last week’s episode with Democratic Alliance (DA) federal leader John Steenhuisen and OSA’s Mudzuli Rakhivhane, Cliff interrupted the latter, claiming that her comments, and in particular her personal experiences of racism, were “anecdotal and unimportant”.

He did, however, admit to “being quite brash” during the interview.

“I’ll own it, but that’s also me. I do erupt sometimes, I sound very dismissive sometimes, I can be quite brash, I totally accept it,” Cliff said on his The Burning Platform YouTube show.

Watch Gareth Cliff and Mudzuli Rakhivhane give it a go…

He continued: “I could’ve treated her with a little bit more respect [because] I do treat everyone the same when they come on this show.

“In terms of style and manners, I could’ve been slightly less abrasive and maybe I would have had a different reaction.”

Cliff then disputed reports that Steenhuisen had a “smirk” on his face following his comments to Rakhivhane.

“They’re really looking for something where there is nothing. I don’t think even he was prepared for what happened in the aftermath of this whole thing”.

‘I’M NOT ANGRY WITH NANDO’S’

And on Nando’s decision to cut ties with the show, Cliff added: “I’m really not angry with them, I think they did what they had to do.

“They did it because corporations have to make decisions sometimes which are uncomfortable and difficult.”

Cliff claimed that the media had also unfairly targeted him in the week before elections.

“I’m not running for office, I’m not looking for votes, but I became the story instead of the political parties or the independent candidates”.

ALSO READ: Tweeps on ‘Tembisa 10’ ad: ‘Nando’s creativity is coming back to bite’