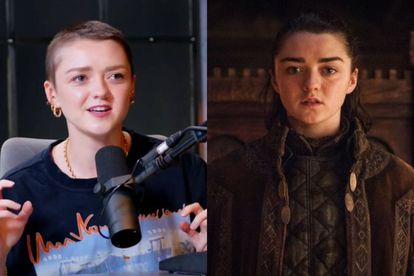 Actress Maisie Williams as Arya Stark in ‘Game of Thrones’. Image via Twitter @atw_uk and @SteveBartlettSC
·

Actress Maisie Williams as Arya Stark in ‘Game of Thrones’. Image via Twitter @atw_uk and @SteveBartlettSC
·

Talented actress Maisie Williams, who portrayed the impulsive and fearless Arya Stark in Game of Thrones has opened up about being in a child cult against her mother, her traumatic relationship with her father, and her abusive childhood.

ALSO READ:Watch: Maisie Williams talks about the ending of Game of Thrones

MAISIE WILLIAMS: ‘I AM SO GRATEFUL TO HAVE PLAYED ARYA STARK’

The Game of Thrones actress Maisie Williams, who became popular for her role as Arya Stark recently gave an emotional account of her traumatic relationship with her father for the first time as a guest on British businessman Steven Bartlett’s The Diary of a CEO.

“I don’t really want to go into it too much because it affects my siblings and my whole family,” says Maisie, whose real name is Margaret Constance Williams.

According to You Magazine, her mother, Hilary Pitt Frances, who’s also her manager and personal assistant, left the household and left the actress in her father’s care from the time she was four months old.

She adds that she struggled to sleep for as long as she can remember due to what was going on at home.

‘I am so grateful to have played her’: Maisie Williams learned a lot playing Arya Stark. I think a lot of the traumatic things that were happening, I didn’t realise that they were wrong.”

Williams only became aware that other children were not exposed to the “pain or dread or fear” she was subjected to at home.

It was only when her teacher pulled her aside out of concern for her wellbeing and asked her if she’d had breakfast that she realised things weren’t okay at home.

Maisie said no, and that it was a normal practice at home to skip meals, her mother was alerted, came to school to fetch her and her siblings.

“It was the first time that all of the doors were sort of open and all of these things that we were experiencing were out on the table.”

“I was indoctrinated in a way. I think that’s why I’m obsessed with cults. I get it. I get it. I was in a child cult against my mother… So I really was fighting it in the beginning.

“My whole world flipped on its head. Even though all these things that I was feeling, I thought, ‘Oh my God I’m so glad I don’t have to see my dad anymore.’ It still was like against everything that I had ever known to be true,” Maisie says.

She added that for a long time she was anxious as a result of what she’d gone through.

“I just had that sense of impending doom and I didn’t know how to make it go away”.

ALSO READ:‘House of the Dragon’: ‘Game of Thrones’ prequel to hit screens this August