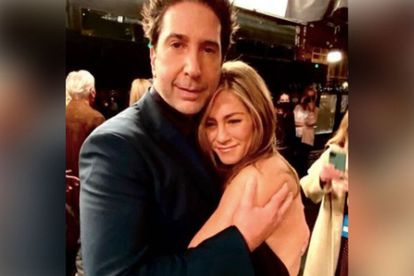 They were the perfect onscreen couple…which is why it makes perfect sense that Friends co-stars Jennifer Aniston and David Schwimmer are dating in real life!

That’s the word from fans of the hit 90’s sitcom who are elated at news that their favourite TV romance is becoming Hollywood’s hottest new  coupling.

The co-stars who played couple Rachel Green and Ross Gellar on the hit show have been linked, and they’re more than just friends if rumours are to be believed!

FANS OF ‘FRIENDS’ ARE CRUSHING HARD ON THE COUPLE

Loyal fans of Friends have taken to social media to express their excitement about the dynamic duo and with good reason.

“The world collectively losing their s*** over Jennifer Aniston and David Schwimmer is honestly the best thing that’s happened all year” tweeted one fan.

Another added; “Petition to have worldwide street parties if it’s confirmed that Jennifer Aniston and David Schwimmer are actually dating”.

BUT ARE THE RUMOURS TRUE?

According to a source, both Jennifer and David have been spending time together following the Friends reunion Netflix special which aired back in May this year.

“After the reunion, it became clear that reminiscing over the past had stirred up feelings for both of them and that chemistry they’d always had to bury was still there,” the source told publication Closer.

But sadly, representatives of both Jennifer and David have denied the rumours to media outlet Fox News.

The news is a bitter pill for many to swallow, especially considering that both David and Jennifer admitted during the reunion to “crushing” on each other during the show’s decade-long run from 1994 to 2004.

David also admitted that the pair never actually acted on their feelings for each other, considering they were both coupled up with other people.

“We were both crushing hard on each other, but it was like two ships passing…One of us was always in a relationship and we never crossed that boundary,” he said during the Friends reunion.

During the time of the show, David was dating English artist Zoe Buckman who he went on to wed and father a daughter with. The couple sadly split in 2017

ADDING FUEL TO THE FIRE

Jennifer was married to Brad Pitt and then later Justin Theroux, of whom she has both divorced.

Since their marriage splits both stars have remained extremely private about their love life, although Jennifer did add fuel to the fire with a recent Instagram post about Friends merchandise which read; “For the record… we were SO not on a break”, alluding the the couple’s onscreen break-up.

We can but dream of them hooking up one day, right?

On This Day in South Africa: What happened on 30 November?

Kappa explain what attracted them to Kaizer Chiefs