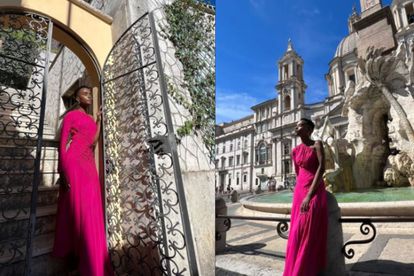 Former Miss Universe Zozibini “Zozi” Tunzi is on vacation in Rome, Italy, as seen in an Instagram post on Thursday 1 September.

Miss Universe 2019, Zozibini Tunzi, affectionately known as Zozi, is soaking up the Italian vibes in Rome. She shared several photos of herself on her getaway. Take a look…

Although Zozi is posing alone, her photo credits suggest that she may be spending time with Olympic volleyball player Lindsey Berg.

The former Miss Universe is set to make her film debut in The Woman King alongside American actress Viola Davis and Thuso Mbedu. The Woman King is written by Dana Stevens and directed by Gina Prince-Bythewood.

“I am so honored and excited to announce that I have been cast for the film, The Woman King ( @womankingmovie ) . It is a completely new world and first time experience for me so I enter it with the utmost respect and humility. Forever grateful and looking forward ❤ #TheWomanKing,” she wrote on Instagram.

According to The Hollywood Reporter, The Woman King is believed to be inspired by true events that took place in the Kingdom of Dahomey. This was one of the most powerful states of Africa in the 18th and 19th centuries.

The plot follows Nanisca (played by Davis) the general of an all-female military unit, and Nawi ( Mbedu), an ambitious recruit. Nanisca and Nawi fight enemies who violated their honour, enslaved their people and threatened to destroy everything they’ve lived for.