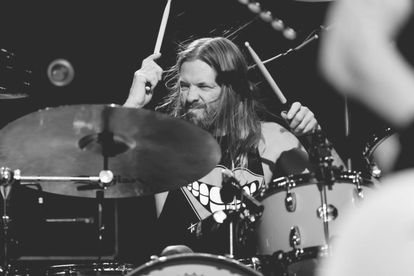 Mystery surrounds the death of Foo Fighters drummer Taylor Hawkins, who was found dead in his Colombian hotel room on Friday, 25 March.

The longtime member of the rock band – which was currently on tour in South America – had a history of substance abuse.

The Foo Fighters were scheduled to perform at Festival Estéreo Picnic in Bogotá, Colombia at the time of Taylor’s death.

In a statement on their social media accounts, Foo Fighters announced the untimely death of Taylor Hawkins.

It read: “The Foo Fighters family is devastated by the tragic and untimely loss of our beloved Taylor Hawkins.

“His musical spirit and infectious laughter will live on with all of us forever. Our hearts go out to his wife, children, and family, and we ask that their privacy be treated with the utmost respect in this unimaginably difficult time.”

No cause of death was given.

Kiss singer Gene Simmons tweeted: “Shocked and saddened to hear @taylorhawkins has passed away today.! Our prayers and condolences go out to the Hawkins family, ⁦@foofighters ⁩friends and fans”.

Black Sabbath star Ozzy Osbourne posted: “@TaylorHawkins was truly a great person and an amazing musician. My heart, my love and my condolences go out to his wife, his children, his family, his band and his fans. See you on the other side”.

And Slash shared: “Devastated by the loss of our friend #TaylorHawkins I’ve no words to express all the feelings I have about his passing. But my heart goes out to his family. & his band & friends”.

Prior to his death, Taylor Hawkins had been vocal about his drug abuse, and even once overdosing on heroin.

In 2001, four years after joining Foo Fighters, Taylor overdosed on heroin, spending weeks in a coma.

He told Kerrang! of his experience: “Everyone has their own path and I took it too far.

“I was partying in London one night, and I mistakenly did something and it changed everything. I believed the bull***t myth of live hard and fast, die young.

“I’m not here to preach about not doing drugs, because I loved doing drugs, but I just got out of control for a while and it almost got me.

“I was heading down a road that was going to lead to even worse paths. Whether someone’s sober, or they like a glass of wine with dinner, or they want a bottle of Jägermeister before they go on stage, or they like to smoke doobies all day long, everyone has their own path, and I took it too far.

“I’m glad it got knocked on the head at that point. I wouldn’t take anything away that I’ve done or been through either, because it’s all part of the trip and the journey. I’m trying to be as candid as I can be.”

After his overdose, Taylor revealed he stayed sober by mountain biking, listening to rock music and recording new songs.

Foo Fighters recorded their album One by One in the months following Taylor Hawkin’s overdose.