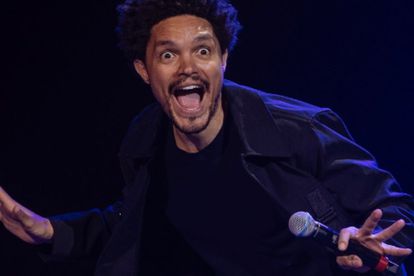 South African-born comedian Trevor Noah sat down with The Hollywood Reporter for a bombshell interview on his plans following his exit from The Daily Show, the rumours surrounding his love life, and more.

FIVE BOMBSHELLS FROM THE INTERVIEW

The comedian revealed that following his exit from The Daily Show he would like to make and act in movies.

“I’d love to make great movies, and I’d like to act in some of them, but I think stardom is a byproduct of a job well executed, so that’s not something I’m too concerned about,” he said to the Hollywood Reporter.

“If anything, I wouldn’t mind a little less stardom so I can eat a few meals uninterrupted,” he continued.

2. THE COMEDIAN ON EIGHT-FIGURE SALARY AND ‘GUARANTEED INCOME’

Trevor told the reporter that he once read about Conan O’Brien’s early days in late night – calling it a great deal. The comedian brings home an eight figure salary a year at The Daily Show.

“I’ve just never found myself particularly enamoured by the idea of a constant guaranteed income, and the thing I appreciated from the network side was that they always said to me, ‘You’re here as long as you want to be here’,” he said.

3. WHY TREVOR SHOCKED STAFF WITH ANNOUNCEMENT LIVE ON AIR

The comedian revealed that he told staff about his exit live on air because he didn’t want anybody to be the person who told someone else.

“it felt like the most natural way to tell everybody at the same time,” he continued.

ALSO READ: Trevor on Dua Lipa, being accused of affair with married friend

The pair were also seen sharing a kiss before while taking a walk. When asked about the romance rumours between him and singer Dua Lipa, the comedian just leaned back in his chair and laughed.

5. TREVOR ON BEING ACCUSED OF HAVING AN AFFAIR WITH FRIEND’S WIFE

The comedian also  opened up about being accused of having a romantic relationship with his married friend.

The publication reports that the South African-born comedian met with a married couple who were both friends of his and hugged the wife. Thereafter tabloids reported that Trevor had a new woman in his life.

“And then the family calls the husband, like, ‘Oh my God, Trevor’s having an affair with your wife,” he said.

“And my friend’s like, ‘I’m in the picture, too,’ and they’re like, ‘Well, that’s not what the tabloids say.’ And it’s just amazing to me how powerful these things are,” he continued.