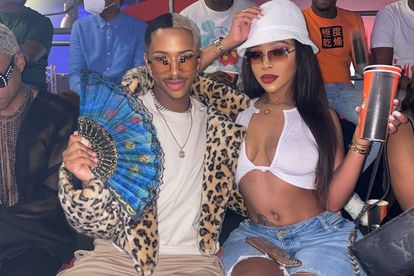 The only thing more entertaining than watching the Fame vs Clout match was reading through Twitter posts of celebrities live tweeting the event.

Cassper Nyovest and Slik Talk faced off in their hotly-anticipated boxing match on Wednesday night. And besides the actual fight, the commentary was nothing short of hilarious!

A number of celebrities attended the live match held at an undisclosed venue. According to Cassper Nyovest himself, Fame vs Clout was a “closed fight” and only a handful of guests were invited.

Making the VIP lists was reality TV stars Lasizwe and Faith Nketsi posed up a storm at the event and after party.

Also scoring an invitation were music artists like Big Zulu, L-Tido and Naakmusiq – who accepted Cassper’s challenge to the next fight.

Cass and Naak will go head to head at the next celeb match on 8 April 2022 at the Superbowl in Sun City.

Sol Phenduka from Podcast and Chill gave us some side-splitting insight alongside Slikour and Robot Boi.

And adding magic to the night was boxing veteran Dingaan Thobela who congratulated Cassper and Slik Talk on an entertaining match.

Meanwhile on Twitter, celebs tweeted up a storm about the Fame vs Clout match.

And stars like Samething Soweto, Phil Mphela and DJ Franky congratulated Cassper on an entertaining event.

And Gigi Lamayne thanked her industry colleague for standing up against cyber bullying.

On the flipside, Master KG congratulated the YouTuber on doing what fellow rappers AKA and Prince Kaybee failed to do. He tweeted: “Please give it up to Slik Talk for making it into this fight! lMany just talked n never acted”.