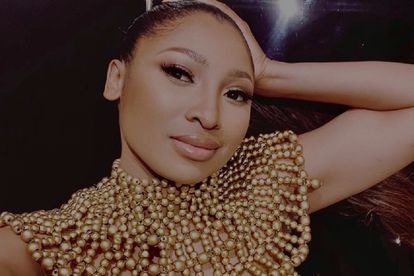 Enhle Mbali Mlotshwa has come forward with screenshots of messages from an unknown person who is threatening to leak her ‘sexy pics’. Image via @enhlembali_/Instagram

Enhle Mbali Mlotshwa has come forward with screenshots of messages from an unknown person who is threatening to leak her ‘sexy pics’. Image via @enhlembali_/Instagram

Actress Enhle Mbali Mlotshwa has taken to Instagram to share messages sent to her by an unknown person who is threatening to leak r-rated pictures of her.

The A Safe Bet actress shared a conversation between her and the unknown person making the threats.

“Why are you telling me about Peter?” Enhle asked in the texts.

“We have the sexy pics you sent each other that will get more views,” read the message.

ALSO READ: Black Coffee opens up about going to therapy to heal during divorce

According to the mom of two, the person may have hacked into her phone to obtain whatever information they say they have obtained.

“You have been warned we also have rights,” the person on the other end threatens Enhle.

“I spoke up last night against the evil and gaslighting that has tormented me into a psyche ward, because how dare I recognise #AmaLungelo that women such as Sojourner fought for. All because I fall outside of a cabal! #SonkeSinamaLungelo *illegally *comes. Abuse is Abuse!!!” Enhle captioned her post.

The actress has taken on a role in a series to raise awareness against gender-based violence (GBV). Her role in Four Walls comes over a year since she accused her estranged husband Nkosinathi “Black Coffee” Maphumulo of physically abusing her

Speaking to IOL about her role, Enhle said: “I had the responsibility to ensure that the story of many women was told in an authentic and heart-warming manner. I had to ensure that every second was jam-packed with Grace thinking, feeling, walking, and breathing like a woman who is experiencing the most severe kind of GBV.

“Also bringing it home and letting people into the homes of women who go through such abuse, the desperation that comes with it so they may feel some form of empathy and start conversations that lead to real change in a country ridden with painful statistics of GBV”.