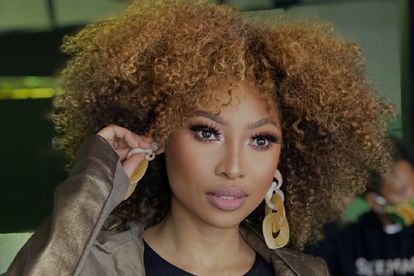 Speaking to Dineo Ranaka and Sol Phenduka on the Kaya 959 Breakfast show on Thursday 18 August, the mom-of-two said she had to check herself into a mental institution a few years ago because she had become numb.

ENHLE MBALI OPENS UP ABOUT HER MENTAL HEALTH ISSUES

The former Isibaya actress shared that she is now in a “really great place” because she had to deal with mental health challenges at an institution.

She further revealed that she felt she had gone beyond depression.

“At this point, I’m not remembering anything. I’m constantly numb. I don’t know how I feel. I don’t have an opinion. And that to me said something is wrong.

“I was crying every second I could possibly get. I was mourning a death and the death happened a long time ago,” Enhle added.

She also explained that she was using death metaphorically, as she was referring to the death of a love.

“I was mourning all the work I had put in, the fight I had put in to make something work and it didn’t,” Enhle said.

This is not the first time that Enhle has opened up about her journey of healing. In 2021, the Rockville actress’s documentary, titled The Voice, depicted the healing journey she went through.

“So the reason I made that documentary is that women are a lot of the time failed by the justice system. I am a believer that a man is meant to protect a woman but our country is in disarray because men have forgotten what the role of a man is and continue to not only harm the women but to harm women and children, who are not the weakest but need protection in society,” Enhle told The South African in February 2022.

The documentary followed after her highly publicised divorce from Black Coffee, who is the father of her two boys.

In 2019, it was reported that the couple had split and with allegations of infidelity and abuse at the core of their separation.

Enhle and Black Coffee’s divorce has been very rocky as the DJ and producer has been rumoured to have fathered children with other women while the couple was married.

In March 2021, Enhle applied for a protection order against her ex-husband. This came after she had accused the DJ of abusing her at her birthday party in their matrimonial home.

The two ex-lovers have also taken to social media to take jabs at each other, including the time when the We Dance Again DJ went off at his ex-wife about paying R65 000 maintenance and giving her a car after their split.

His rant was fuelled by Enhle’s claims that she and the boys had been in the dark for a few days because he had not paid the electricity bill.