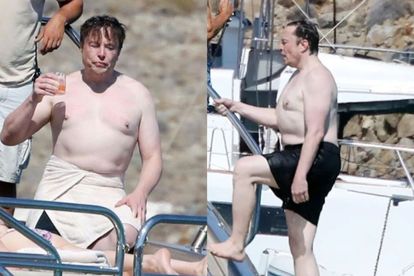 Elon Musk spotted shirtless while on vacation in Greece in July. Images via Twitter @WUTangKids @FriendEden100.

Elon Musk spotted shirtless while on vacation in Greece in July. Images via Twitter @WUTangKids @FriendEden100.

Tesla and SpaceX CEO Elon Musk reacted to Twitter users trolling him over a shirtless photo of himself on vacation in Mykonos, Greece which went viral on Monday 18 July.

Billionaire Elon Musk enjoyed some time away on vacation in Mykonos, Greece. The Tesla CEO was spotted shirtless on a luxury yacht while on vacation in the Greek island. The photos of a shirtless Musk went viral on Twitter.

The billionaire was with a group of friends which included fashion designer Sarah Staudinger and her new husband, superstar agent Ari Emanuel. Page Six reports that the luxury yacht costs an estimated $20 000 (R340 930) per week. The yacht is believed to accommodates six guests in more than three cabins and comes with a professional crew.

Musk reportedly boarded the yacht in a plain white T-shirt, black swim shorts, sunglasses, a baseball cap and flip-flops. The billionaire stripped down to just his bathing suit. Take a look…

THE BILLIONAIRE REACTS TO BEING ‘BODY SHAMED’

Tweeps did not seem to enjoy seeing a shirtless Musk on their timeline. So, many began to “body shame” the billionaire over his pale physique and the flab on his tummy.

Musk has since reacted to the photo. This comes after a Tweep shared the photo and said he would put his money behind the SpaceX CEO.

“F*** yea I got my $ behind this man. So, so many other smart investors,” tweeted @Teslaconomics.

Musk then responded to the tweet by saying he should go shirtless more often and “free the nip.”

“Haha damn, maybe I should take off my shirt more often. Free the nip!! (already back in the factory btw),” he tweeted.

This comes after the billionaire pulled out of his $44 billion deal to acquire Twitter. This was because the company was not sharing information regarding bots on its platform. Twitter responded by filing a lawsuit against Musk and claiming his actions were a “bad faith” attempt to walk away from the agreement.

This also follows the news of Musk welcoming a pair of twins with his top executive Shivon Zilis in November 2021, just a month before he welcomed his second child with Canadian musician Grimes. So, this means Musk has fathered 10 children.