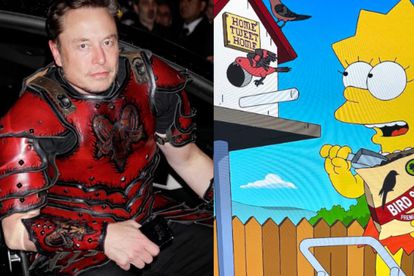 ALSO READ: Is Pretoria-born Elon Musk one of ’44’ Afrikaans-speaking people?

The Pretoria-born billionaire credited The Simpsons for predicting his Twitter takeover.

So, what exactly was in the episode?

Well, in 2015 the show seemingly hinted at Musk’s Twitter takeover in an episode titled The Musk Who Fell to Earth. The episode begins with Lisa Simpson tending to a birdhouse which has a sign that reads “Home Tweet Home”.

Lisa is feeding baby birds when a bald eagle grabs them and kills them. The eagle flies into the distance. The billionaire arrives in his rocket ship. Fire from the aircraft then incinerates the eagle.

“Brace yourselves, family. We are about to meet a being with intelligence far beyond ours,” said Homer Simpson before directing Bart to grab his baseball bat.

The billionaire then introduces himself – “Hello, I’m Elon Musk” he says. Homer then hurls the beat at his head while Lisa praises Musk.

“Dad, no! Elon Musk is possibly the greatest living inventor,” she said.

A new technologically advanced birdhouse that attracted several birds is then seen.

“I guess humanity wants its change once birdhouse at a time,” said Lisa.

Over the years The Simpsons is believed to have predicted many things that took place years later. This includes: