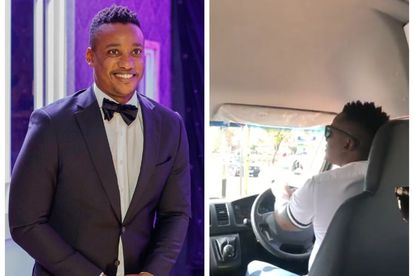 In another taxi-driving clip, Duduzane Zuma is seen enjoying his trip with his passengers who were not very keen on paying. Image via Twitter @hrh_sasa_yende, @azania1023

In another taxi-driving clip, Duduzane Zuma is seen enjoying his trip with his passengers who were not very keen on paying. Image via Twitter @hrh_sasa_yende, @azania1023

Duduzane Zuma’s passengers were left laughing out loud in a recent video where he is seen driving a taxi as they hilariously ask “are we still paying?”.

The 38-year-old ANC ward 11 branch chairperson has been filmed a few times in vests and shorts cleaning up parts of KwaZulu-Natal before and after the floods. And it seems he is working hard toward his mission to follow in his father Jacob Zuma’s footsteps as he has broadened his presidential campaign to Gauteng.

In a recent video, the former president’s son is seen driving his passengers around in a quantum.

Duduzane’s passengers were clearly enjoying the trip as he attempted to speak Setswana and Xitsonga to accommodate them during their journey from the Tshwane Regional Mall to Mamelodi.

This is not Duduzane’s first time swapping his expensive Porsche for a quantum.

In December last year, he was officially made the ANC branch chairperson of Ward 11 in eThekwini, and he made sure to celebrate in style. At the time, Duduzane pulled through to the Newlands East Community Hall in a packed yellow taxi while playing amapiano music.

His experiences with taxis do not end there. In February 2014, Duduzane crashed into a taxi with his Porsche 911 Turbo after the Grayston Drive offramp in Sandton, resulting in the death of taxi passenger Phumzile Dube and several others injured.

According to TimesLIVE, in the same year, the National Prosecuting Authority (NPA) declined to prosecute Duduzane Zuma due to “insufficient evidence”. However, in December of the same year, the Randburg Magistrate’s Court found that negligence by Zuma jr was the cause of Dube’s death. Four years later, the National Director of Public Prosecutions (NDPP) reviewed the decision not to prosecute him and decided that prosecution must ensue.

After a court case in 2018 and 2019, the verdict handed down by Magistrate Tebogo Thupaatlase as he ruled on Duduzane’s culpable homicide, reckless and negligent driving case was that he was not guilty — News24 reported.