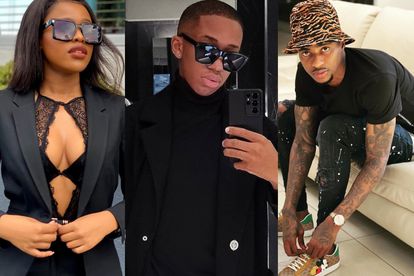 Lasizwe reveals he has a crush on Lorch. Images via Instagram @natasha_thahane @lasizwe @thembinkosi_lorch_3.

Lasizwe reveals he has a crush on Lorch. Images via Instagram @natasha_thahane @lasizwe @thembinkosi_lorch_3.

Social media star Lasizwe Dambuza revealed that he and Blood & Water actress Natasha Thahane have unfollowed each other on Instagram, on the latest episode of his show Drink or Tell the Truth on Friday 24 September.

In the latest episode of Drink or Tell the Truth, Zakes Batwini’s wife Nandi Madida was the special guest. She asked Lasizwe which soccer player he wouldnt mind waking up to from George Lebisi, Thembinkosi Lorch and Andile Jali.

“From these soccer players I’m about to mention, whose chest wouldn’t you mind waking up next to — George Lebisi, Thembinkosi Lorch and Andile Jali?” asks Nandi Madida.

Lasizwe then does an amapiano dance move signaling that the answer is Lorch, because of the Kabza De Small and DJ Maphorisa amapiano hit Lorch. Nandi Madida then reminds Lasizwe that he is friends with Lorch’s girlfriend actress Natasha Thahane. Although Lorch recently said he was single, the couple have not yet publicly confirmed their break-up.

“No, to be honest even Natasha and I have unfollowed each other on all platforms,” said Lasizwe.

WHY DID LASIZWE UNFOLLOW NATASHA?

Lasizwe Dambuza and Natasha Thahane have had a great friendship over the years. Here is a quick look at how affectionate the pair has previously been with each other.

However, things have since gone sour. The Drink or Tell the Truth host previously spilled what transpired between the pair in a previous episode.Lasizwe told his guest rapper Nadia Nakai that Natasha told him she would be a guest on the show and let him down three times as he and his team waited for her and had to pack up when she was a no-show. This was on the episode that aired on 27 August.

“Which celebrity friend of yours have you asked for a favour and disappointed you? Or did not show up, besides Natasha?” asks Nadia Nakai.