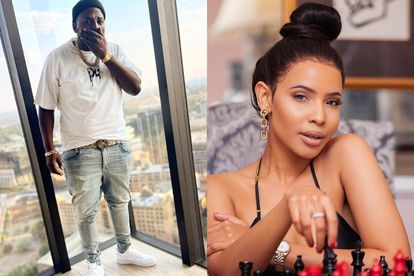 There seems to be no end to the trolling of DJ Maphorisa on Twitter after a nude picture of a man rumoured to of the DJ, went viral on Wednesday 13 October. Many grabbed the opportunity to mock the DJ’s alleged relationship with actress Thuli Phongolo.

After a video of DJ Maphorisa and Thuli Phongolo went viral on Twitter, many believed the pair were dating or romantically linked at least. While the “Twitter Police” matched single pictures of the pair with the same background, more saucy videos of the pair emerged.

However, the fun and games quickly turned into harsh trolling as some tweeps implied that DJ Maphorisa did not deserve the actress because she is light-skinned and he is not. This sparked a heated debate on colourism in South Africa on the social media platform.

Dr Musa Mthombeni, who is married to former Miss South Africa and radio personality Liesl Laurie-Mthombeni, was also dragged into the colourism conversation. Because of his skin tone, the “master of captions” previously joked that he felt like Liesl’s dirty dark secret.

The trolling did not end there! A nude picture of a dark-skinned man with a light-skinned woman’s hand on his bare behind that was shared by a tweep, soon went viral. Tweeps saw this as an opportunity to poke fun at the rumours of a romance between the pair.

While the picture is not likely to be the Lorch hitmaker as Thuli does not have any tattoos, it was the light-skinned hand on the man’s behind that had tongues wagging!

Tweeps in the comments section dragged Thuli and Maphorisa into the mix. Here’s what they had to say…

“Maphorisa is going to sue someone for 700K in this TL; that pic is risky as hell!!!!,” wrote @krugersville.

“You people will get sued. Is that Madumane in that picture?,” wrote @SithaleKgaogelo.