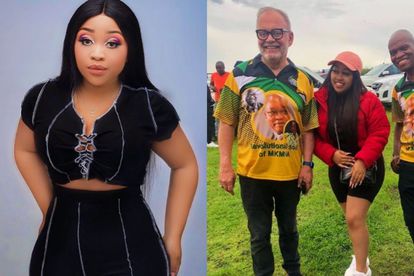 Tweeps claim the ANC secured DJ Hlo’s Ukhozi FM Song of the Year award for her. Images via Instagram @djhlo

Tweeps claim the ANC secured DJ Hlo’s Ukhozi FM Song of the Year award for her. Images via Instagram @djhlo

Hlosiwe Mthalane aka DJ Hlo caused quite the stir on 1 January after she won Ukhozi FM’s Song of the Year Award for her track Isibani. Tweeps took to Twitter claiming she only won the award due to her affiliation with the ruling party, the African National Congress (ANC).

On 31 December 2021, DJ Hlo won Ukhozi FM’s Song of the Year Award, raking in 214 966 votes. She beat out the likes of Young Stunna, Kabza De Small, DJ Maphorisa, Zakes Bantwini and Makhadzi for the award.

“It feels amazing, regardless of the backlash. History has been made as the first female DJ to cross over the year, so it feels amazing. My social media has skyrocketed,” she told TshisaLive.

AFFILIATION WITH THE ANC

On 28 December 2021, the 24-year-old DJ posted a few pictures on Instagram with ANC members including the party’s former spokesperson, Carl Niehaus. The pictures were taken in KwaNxamalala, Nkandla, where former president Jacob Zuma’s home is.

She captioned the post: “Come rain or shine the mission continues. And of course, it was accomplished.”

Some claim DJ Hlo’s affiliation to the ANC is what bagged her the Ukhozi FM Song of the Year win.

“That DJ Hlo hun is pro ANC and people are shocked she won.”

“DJ Hlo has a membership with the ANC, it makes sense why her song was number one.”

THINGS TO KNOW ABOUT DJ HLO