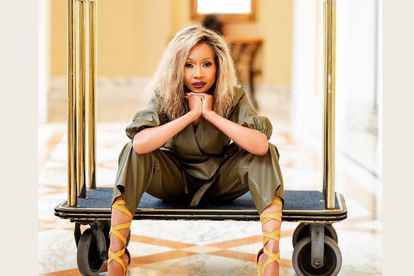 Radio personality and reality star Dineo Ranaka had heads turning after posting a picture in the nude while she was five months pregnant with her daughter – via Instagram on 15 March.

Dineo Ranaka shared a photo of herself standing tall.. In the nude. She says she was five months pregnant with her daughter at the time the photo was taken. Her hand strategically covers her lower tummy and her breasts are blurred out. This comes after actress Enhle Mbali also shared a nude photo in celebration of her 34th birthday.

She turned off the comments on the post but the photo received over 30 400 likes. Take a look…

Dineo also shared the first look at her baby since she announced the baby’s arrival in July 2021.

WAS SHE PREGNANT WITH HER THIRD CHILD HERE?

“And unto me a child was born. Welcome to the family little one ????,” she wrote in her announcement post.

Dineo was full of surprises – she announced that she was secretly married to Klaas Pesha but later that year she revealed that she was divorced. This was in a heated argument with what appeared to be her boyfriend Sechaba Thole.

The radio personality lashed out at him telling him she ended her marriage in under a year because she knows her worth.

The radio personality also has two other children – 11-year-old Kgosi and eight-year-old Kopano.