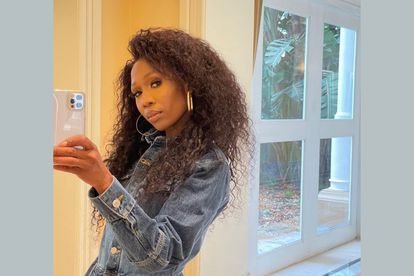 Media personality Dineo Ranaka opened up about planning on cheating on her ex-husband Klaas Pesha after he cheated on her – on an episode of Podcast And Chill on 31 March.

DINEO: ‘I PLANNED TO CHEAT ON HIM TOO’

Dineo Ranaka confirmed that her ex-husband, who she was married to for just under  a year, cheated on her. However, she did not think cheating was the problem, she would have stayed and cheated back.

“Yes, he cheated on me, If I was still in that marriage, I’d be planning to cheat on him too. He knows this, we discussed it. I told him when my caesarean scars get better ke tlogo febela go hlanya,” she said.

The Metro FM host went on to say that the reason she left her marriage was because of abuse.

“My marriage didn’t work because I was beaten up… with a baby in my arms,” she said.

“It has nothing to do with me being a strong woman,” she continued.

DINEO ON AN ABUSIVE MARRIAGE

Dineo went on to claim she was abused while she had her three-month baby in her hands and thats when she decided to leave.

“If that guy didn’t hit me in my marriage, then we would still be on good terms. I had my three-month-old baby in my arms the last time he hit me and I was like no, this is not how it’s going to go down. Not me who doesn’t submit to bull,” she said.

She went on to say he tried to silence her.