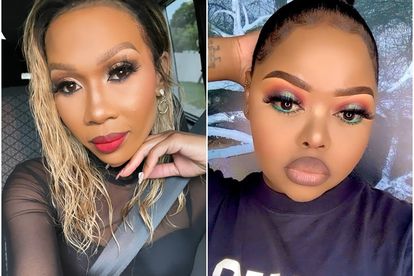 Dineo Ranaka has not had the best publicity in recent weeks, and sadly it’s about to get worst.

This time around, the TV personality has been named and shamed by a make-up artist for allegedly exploiting her and refusing to pay her her dues.

This after she was hired by Dineo to promote the star’s make-up brand Luvdr.

DINEO RANAKA CALLED OUT FOR EXPLOITATION

A make-up artist by the name of Felicia Zwane has accused Dineo Ranaka of exploiting her after she was commissioned to do work for her.

Felicia claims that the star booked her for two days from 3-4 December 2021. According to the beauty professional, Dineo Ranaka agreed to pay her her rate of R550 per hour.

She also claims that she worked seven hours, amounting to a total of R3850.

But things went sour when Dineo Ranaka seemingly ghosted her after she performed her duties. In screengrabs posted by celeb blogger Musa Khawula, Felicia sent several DMs to the presenter and actress, which went unanswered.

After becoming irate with the star, Dineo Ranaka finally responded with a less than friendly message.

“Let’s not make a mess out of something that needn’t be a mess” she adds in her email to Felicia.

Weeks after being criticised for her public rant with boyfriend, Dineo Ranaka was dragged again on Twitter for her actions.

Many tweeps demanded the star pay the owed money to Felicia as agreed upon.

“That Dineo has always been toxic…. I can’t believe there are women looking up to her”

“Everyone has their rate/what they think their work is worth. If you’ve used their services, pay up”

“So she went into business with her and concluded an agreement, but now she wants to do an industry rates comparison. WTF?”

“It’s NOT the first time. She had a fall out with her former manager over payments and the case ended up in court. Dineo lost the case and had to pay the manager”

“Dineo is dishonest & the only who has stolen here is her. You can’t conduct due diligence after services has been rendered?”