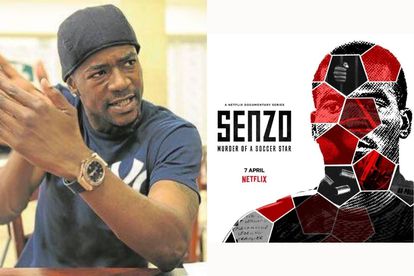 The much-anticipated documentary Senzo: Murder of a Soccer Star officially released on Netflix on Friday 7 April and it seems Longwe Twala’s son has been accused of killing the former Bafana Bafana captain.

Senzo Meyiwa was said to have been shot during an armed robbery at his then-girlfriend Kelly Khumalo’s home in Vosloorus on 26 October 2014. Netflix’s documentary Senzo: Murder of a Soccer Star dived into the details of that night.

The documentary used both previous and current interviews and in episode four, a theory from a series of tweets were looked into. A parody account, which goes by the handle Man’s NOT Barry Roux’s series of tweets were shown on the screen which ran with the theory that Longwe Twala – son of South African musician Chicco Twala and boyfriend of Kelly’s sister Zandie at the time – allegedly killed Senzo.

So Man’s NOT Barry Roux claimed that Longwe and Zandie got into an argument. Senzo allegedly tried to defend Zandie and Longwe pulled out a gun. Longwe allegedly pointed the gun at Kelly and Senzo and the soccer star shifted Kelly to his back and Longwe fired the gun.

This may seem like a far fetched theory, but there were some details that add up to the theory.

Kelly is said to have called three people after Senzo was shot – his wife Mandisa Mkhize, his sister Nokuthula and Chicco Twala. Everyone wants to know why Kelly would call Chicco after Senzo was shot because he was just producing her album. Why would she think of calling him? It is also worthy to note that Chicco is Longwe’s father – further raising suspicions.

SENZO’S SISTER SAYS HE GOT INTO A FIGHT WITH LONGWE

The second call Kelly made was to Nokuthula and she said she could not hear what Kelly was saying because she was screaming. She said she gave the phone to her husband and he said that Senzo had been in a fight with Zandie’s boyfriend.

“My husband took the phone to hear what Kelly was saying. She said Senzo was hurt while breaking up a fight. He was stopping a fight between Kelly’s sister and her boyfriend,” said Nokutjula.

To add to that, another claim from the documentary is that Longwe thought Zandie was cheating on him. It was believed to be with one of Senzo’s friends. The former Bafana Bafana captain allegedly instructed Zandie not to take Longwe’s calls.

THE STORY OF LONGWE’S PHONE DOES NOT ADD UP

In the first episode of the documentary, it was revealed that Longwe escaped the robbery. Tweeps have criticised how he was able to escape as well as him not alerting the neighbours. He said that all the neighbours were sleeping but Tweeps found this hard to believe.

So, this was said to be an armed robbery but the documentary points out that only Senzo’s phone was taken, no one else’s and a BMW X6 was parked in the driveway with the keys on the table and that was also left behind. When Longwe said he escaped he said that he did not have his phone on him.

“I actually ran out. I wanted to go get help but it was late, the neighbours and everyone was sleeping and I didn’t have my phone because I left it at the house so I couldn’t call the cops,” he is heard saying in episode one.

However, when questioned whether his phone was stolen he said the robbers could not have taken his phone because it was in his pocket.

“They couldn’t take my phone because I ran out. I had my phone in my pocket,” he is heard saying in a previous interview in episode four.

This was a red flag for Tweeps.

It was also pointed out that Longwe said he had escaped and he was not there when Senzo was shot but he later says the soccer star was shot after he tried to protect Kelly. So, how did he know the former Bafana Bafana captain died trying to save Kelly?

However, one aspect that does not add up is why would Senzo’s friends, who don’t know Longwe from a bar of soap, cover up for him? There are also rumours that Chicco paid off former Head of Hawks Shadrack Sibiya, Gauteng to make sure he messed up the case. This was after the bullet was checked and did not belong to Chicco or Longwe.

ALSO READ: ‘Why him… in a room full of people?’: Robert Marawa on Senzo’s death