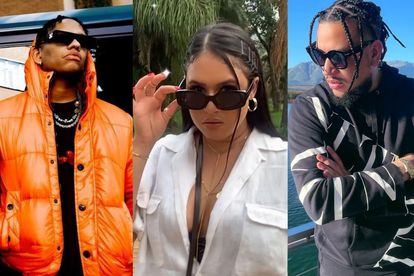 Da L.E.S, the mother of his child Aurea Alexander and AKA. Images via Instagram @2freshles @reathegreat @akaworldwide.

Da L.E.S, the mother of his child Aurea Alexander and AKA. Images via Instagram @2freshles @reathegreat @akaworldwide.

South African hip-hop artist Leslie Jonathan Mampe, popularly known by his stage name Da L.E.S broke his silence on the rumour that rapper AKA was romantically involved with the mother of his child, on an episode of Drink or Tell the Truth today (10 September).

Following the death of AKA’s fiancée Nelli Tembe, an anonymous letter was sent to controversial podcast host Mac G. The letter claimed that Nelli allegedly discovered some text messages with a sexual undertone between the AKA and the mother of Da L.E.S child, Aurea Alexander.

“She was devastated and the messages broke her heart, it was all there in plain sight AKA was having an affair with Aurea, Da LES’ baby mama who was very much involved and still in a relationship with Da LES. They have a daughter together, Kiernan has been to multiple birthday parties for their baby,” read Mac G from the anonymous email.

Although there was speculation that Da L.E.S released a diss track titled Gucci Snakes to throw shade at AKA, the rapper never actually spoke out about the cheating allegations until now. In the latest episode of Lasiwe’s show Drink or Tell the Truth, the Tippy Toes hitmaker said that Gucci Snakes was actually not about AKA.

While Aurea posted a streamy picture with Da L.E.S at the time to show they’re still going, the rapper says he chose a path of peace for his family. Da L.E.S and Aurea have a seven-year-old daughter named Madison together and another baby on the way.

“You did a diss track about AKA sleeping with your baby mama. Is this why you’re not cool anymore? Will you ever make peace again?” asked Lasizwe.

“I’m glad that you asked me this question because number one that was not a diss track for AKA. Number two, don’t believe everything that people say and number three I love my family with all my heart so I just decided to choose a path of family, I got a new kid on the way,” replied the rapper.

He went on to say that people should not believe everything that Mac G says. He also said that he and AKA had a conversation recently and there was no beef between them.

“I decided to just choose a different path in life, just where my energy is concerned, where I am and where I’m going. We were just at the spot the other day and we were conversing so there isn’t any beef. So, just because Mac G said something doesn’t mean it’s true,” he continued.

It seems there is also hope for Da L.E.S and AKA to work together again in the future.

“I mean look if we get back to doing that then 100%,” said Da L.E.S when asked if he would work with AKA again.