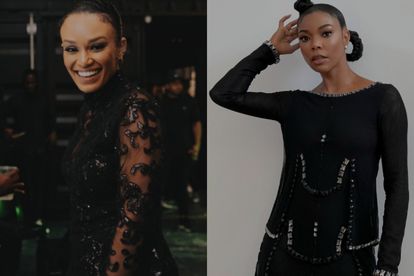 Actresses Pearl Thusi and Gabrielle Union nailed the #CuffIt challenge as they hit the clubs and partied up a storm in Johannesburg. Images via @gabunion, @pearlthusi

Actresses Pearl Thusi and Gabrielle Union nailed the #CuffIt challenge as they hit the clubs and partied up a storm in Johannesburg. Images via @gabunion, @pearlthusi

South African actress Pearl Thusi is partying up a storm with her friend and Hollywood star Gabrielle Union.

A video of the two international actresses nailing the viral “Cuff It” challenge during their time together at two separate clubs in South Africa was shared in a joint Instagram post by the stars.

PEARL THUSI AND GABRIELLE UNION NAIL THE ‘CUFF IT’ CHALLENGE

In the video, Pearl Thusi and Gabrielle Union are seen dancing the night away and enjoying each other’s company.

Captioning their joint post, the actresses asked fans to count how many times they do the #CuffIt challenge. The caption and video also make fun of the moment the Being Mary Jane actress is seen enjoying hot wings.

“Can you count how many times we did this challenge? 😂 1 – watch what happens when hunger strikes at groove… or the wings just SLAP. 2- I was so lit and I’m not ashamed (anymore) 🫣😅 3 – this #cuffitchallenge is officially over y’all.”

The actress, her husband Dwayne Wade and their daughter Kaavia are on a #WadeWorldTour in celebration of the actress’ 50th birthday. The aim is to visit as many African countries as she could with her family.

So far, the family has visited a number of countries including Zanzibar, Tanzania, where Gabrielle Union celebrated her 50th birthday. They also visited Ghana and Namibia before they made their way to South Africa where the actress has been promoting her haircare range, Flawless by Gabrielle Union.

Flawless by Gabrielle Union was launched in America in 2017. This week she visited Clicks in Sandton to launch her products in an event that was hosted by actress Enhle Mbali Mlotshwa.